X-47B gears up for summer milestones 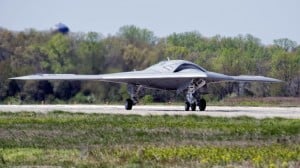 “This summer will be full of activity as the team braces for X-47B’s first flight here and arrival of the second X-47B air vehicle from Edwards Air Force Base, Calif.,” said Matt Funk, UCAS-D lead test engineer. “In the coming months, you can expect to see the X-47B flying over the base and surrounding area along the Chesapeake Bay.”

The X-47B is the first unmanned vehicle designed to take off and land on an aircraft carrier. As part of the program’s demonstration, the X-47B will perform arrested landings and catapult launches at Pax to validate its ability to conduct precision approaches to the carrier. The base is one of only a few sites in the world where the Navy can run performance tests on aircraft-carrier catapult operations at a land-based facility with flight test and engineering support resources not available on a ship.

“Testing at Pax River is a critical component of this demonstration program as we break new ground with the development of a carrier-based unmanned air system,” said Capt. Jaime Engdahl, Navy UCAS program manager. “The integrated test team (ITT), under leadership of AIR-5.0 [Test and Evaluation] and VX-23 [Air Test and Evaluation Squadron 23], are critical members of the Navy UCAS program team that will make this program a success.”

Since the arrival of the first X-47B in late 2011, the UCAS-D ITT has been preparing the aircraft for its initial flight at Pax River. Recently, the X-47B performed taxi testing to validate the overall reliability of the system. The team also conducted tests to determine the aircraft’s ability to catch an arresting wire on an aircraft carrier.

Like manned aircraft, the air vehicle is scheduled to begin six weeks of electronic vulnerability testing at the Naval Electromagnetic Radio Facility (NERF). This test verifies there are no electrical disturbance, signal, or emission issues that cause an undesired response or malfunction of a subsystem or component.

“We are all excited to have a new groundbreaking aircraft here as part of our test program, but as always the Navy puts safety first,” Engdahl said.

Funk added that while shape and design of the X-47B are unique and eye-catching, it is critical that spectators follow base policy and keep a safe distance from the flight line during all X-47B taxi and flight operations.

Engdahl is optimistic about the program’s planned flight test program, including F/A-18 and King Air surrogate aircraft and X-47B testing this fall.

“The program is progressing well in preparation for shore-based catapult launch testing and arrested landings, leading ultimately to our final carrier demonstration in 2013,” Engdahl said.