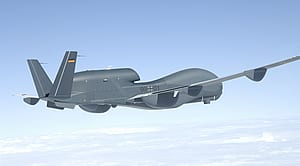 Satellite specialist Newtec’s IP traffic enhancement and shaping technology Cross-Layer-Optimization™ has been implemented in the flagship EURO HAWK® Unmanned Aerial System (UAS) which detects and collects information. The Newtec technology is required in order to secure the downlink via satellite.

EURO HAWK is a joint programme between Cassidian, an EADS company, and Northrop Grumman. It is a UAS which signals a new era for Germany’s Federal Armed Forces – the debut of the largest unmanned aerial system in German airspace.

“It’s a milestone for us,” said Rüdiger Knöpfel, the head of the unmanned project department at the German Federal Office of Defence Technology and Procurement (BWB). “It represents nearly 10 years of concept preparation and development. At 15 metres long, a wingspan of 40 metres and take-off weight of approximately 15 tons, the Euro Hawk by far outstrips other UAS types.”

The EURO HAWK can stay airborne for more than 30 hours and fly more than 20,000 km before needing to refuel. Technicians have equipped the EURO HAWK with German sensors and intelligence technology.

From an altitude of 20,000 metres – which is above the altitude at which civil aircraft fly – the EURO HAWK’s SIGnals INTelligence (SIGINT) system detects and collects information from ELectronic INTelligence (ELINT) radar emitters and communications emitters. It then transmits this information to the ground stations in real-time for analysis and dissemination.

The Newtec Cross-Layer-Optimization solution seamlessly enhances the TCP communication and at the same time includes comprehensive shaping and compression techniques. All technologies interact in order to optimize the communication link. The system can be tailored to provide the maximum availability and bandwidth efficiency to any application running for the EURO HAWK interaction and data transmission.

“The EURO HAWK is an important asset for Intelligence, Surveillance and Reconnaissance operations for Germany and its partner states and has Newtec technology at its core,” said Serge Van Herck, CEO of Newtec. “Key to this project was providing expertise and the right solution to ensure the satellite link for Beyond-Line-of-Sight communications. Newtec technology allows the most data and video as possible through the satellite link whilst providing optimal availability to assure mission critical communications.”

Newtec has a track record of installations on both manned and unmanned intelligence, surveillance and reconnaissance aircraft. The company has 27 years’ experience dealing with high data rates and video transmissions over satellite.