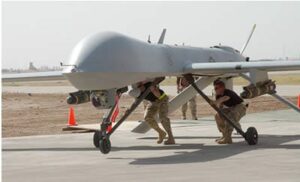 The event included a live flight demonstration over the Pacific Ocean of a GA-ASI Predator® B/MQ-9 Reaper UAS fitted with a SELEX Galileo Seaspray 7500E surveillance radar and showcased the radar’s ability to track targets on land, in the littoral and maritime environments, and from air-to-air. An international audience was in attendance, including officials from the U.S. Air Force, U.S. Department of Homeland Security, and the Ministries of Defense of the UK, Canada, France, Germany, Italy, and The Netherlands.

The SPCD is part of a joint Independent Research and Development (IRAD) effort between GA-ASI and SELEX Galileo to prove the concept and architecture for a fully certified Predator B incorporating a separate mission management system that supports the independent and cost-effective upgrade of future sovereign payloads. GA-ASI performed the software and hardware modifications to the Predator B system to implement the open payload architecture, while SELEX Galileo delivered the radar and supported the integration work. Cobham provides support to UK airworthiness procedures and through-life support as GA-ASI’s teammate in the UK responsible for whole life support arrangements for the Royal Air Force’s (RAF’s) MQ-9 Reaper UAS.

“We’re thrilled to be partnering with GA-ASI and Cobham on such a forward thinking programme. Customers don’t want to be locked into particular payloads, they want the flexibility to integrate their own capabilities and sovereign control over the missions they fly,” said Fabrizio Giulianini, CEO of SELEX Galileo, adding, “Today’s demonstration was the first step in proving the concept of our platform and sensor-agnostic skyISTAR mission management system which will be flexible enough to meet the needs of any UAS programme going forward. To meet the demanding sensor requirements of these future UAS, our Seaspray radar exemplifies the foundation of advanced AESA technology that will allow us to provide high-resolution, multi-mode, multi-domain, and very wide-area coverage surveillance to users.”

“Cobham is delighted to partner with GA-ASI and support this initiative by providing expertise to the airworthiness certification and sensor integration portions of this exciting program,” said Peter Nottage, president of Cobham Aviation Services.