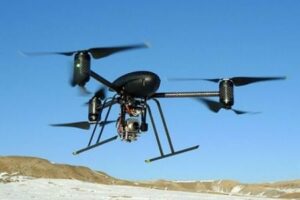 It may be years before unmanned aircraft are common in the sky, but lobbyists for the industry that develops and manufactures the drones are already buzzing around Capitol Hill.

“This is one of the few areas where the government is still spending money and investing,” said Alex Bronstein-Moffly, an analyst at First Street Research, which collects lobbying data.

Lobbyists are pushing on legislation, regulations and appropriations, Bronstein-Moffly said. “This is the trifecta of lobbying.”

Mention drones and most people conjure up missile-firing Predators hovering high above Yemen in search of al Qaeda terrorists. Yet even as the Obama administration defends its use of the drones, the future of unmanned aircraft lies in peaceful applications here at home.

The Association For Unmanned Vehicle Systems International (AUVSI), an industry trade group, has said once drones are allowed to fly in U.S. airspace, “the civil market has the potential to eclipse the defense market.”

That day is coming. The Federal Aviation Administration (FAA) reauthorization bill, passed by Congress and signed by President Barack Obama in February, ordered the agency to safely allow unmanned aircraft to fly in U.S. commercial airspace by 2015. The FAA recently issued streamlined licensing rules for drones for police and other public safety agencies and the Department of Homeland Security is working to speed their introduction. The FAA is expected to finalize a new rule next year for small drones weighing less than 55 pounds.

While privacy advocates fret over the implications of going from 300 licensed drones to as many as 30,000 by 2020, the industry is salivating over myriad applications that include agriculture, energy exploration, weather research, traffic control, wildlife tracking and movie production, to name a few.

A recent study by the Teal Group, an aviation and defense consulting firm, estimated that global spending on unmanned aircraft will almost double over the next decade, from $5.9 billion annually to $11.3 billion. Most of that growth will be in the U.S.

“The expansion of remotely piloted vehicles will create jobs and boost local economies across the country,” AUVSI President Michael Toscano said in an emailed statement to The Huffington Post. He cited the group’s study that estimated drones would create 23,000 new jobs by 2025. “In addition to the positive impact on jobs, the expansion of remotely piloted vehicles also holds the potential to save money for local governments and taxpayers, as they cost much less to operate than helicopters and other manned aircraft.”

For now, though, money is flowing into campaign war chests and covering many billable hours for lobbyists.

AUVSI more than doubled its lobbying budget in 2011, spending $280,000 to work on the FAA bill that authorizes the expanded use of drones outside the military. As a PowerPoint presentation recently obtained by Republic Report shows, the industry group all but wrote the legislation. “Our suggestions were often taken word-for-word,” it says.

No wonder. Political action committees affiliated with drone manufacturers donated a total of $2.3 million to the nearly 60 members of the bipartisan House Unmanned Systems Caucus, according to First Street Research. Most of that, 77 percent, went to Republicans.

The top recipient was Rep. Buck McKeon (R-Calif.), the caucus co-chair who also heads the House Armed Services Committee. He received $176,500 in donations from major defense contractors, including Northrop Grumman, whose Global Hawk drone is made in his district.

When it comes to diversified defense contractors, it is difficult to determine how much money is being spent specifically on drones. Many defense contractors facing reduced Pentagon spending are scrambling to rebrand and tweak their products for the domestic market. Bronstein-Moffley has said financial disclosure data indicates that military contractors like Raytheon, Bell Helicopter Textron and General Atomics have increased their spending on lobbying.

“Military vendors are trying to craft the regulations around their products,” said Patrick Egan, a small-business consultant in the industry. “Money talks.”

Companies that specialize in drone technology are clearly getting their messages across.

According to data compiled by the Influence Explorer, a project by the non-partisan, non-profit accountability group Sunlight Foundation, drone-maker AeroVironment gave nearly $23,000 in campaign contributions to Rep. David Dreier (R-Calif.). In 2010, the soon-to-retire congressman inserted a $1 million earmark for the company to develop a small but lethal handheld drone. Last year, AeroVironment — which has federal contracts worth more than $100 million — spent almost $2.6 million on lobbyists.

Proxy Aviation, a small Gaithersburg, Md., company that makes software for unmanned aircraft, gave $160,000 last year and $60,000 in the first quarter of 2012 to the lobbying firm of former Republican Texas Rep. Beau Boulter.

General Atomics Aeronautical Systems, maker of the Army’s Predator drone as well as a surveillance version for U.S. Customs and Border Protection, has shelled out $730,000 since 2003 for lobbying.

Companies aren’t the only ones making their case. More than 30 communities are competing to be one of six FAA test sites that will be chosen by December.

Wilmington, Ohio, is among them. The small city near Dayton lost 9,000 jobs when the shipping company DHL left in 2009, and now hopes to turn its underused airport into a showplace where the FAA can test the integration of drones with piloted aircraft.

The Dayton Development Coalition, a regional business group, spent $60,000 to tout the site’s proximity to research labs at nearby Wright-Patterson Air Force Base. The University of Dayton has spent $180,000 since 2010 to lobby for increased funding for drone research, according to Bronstein-Moffly.

Other academic institutions also are hiring lobbyists. First Street said at least a dozen universities with engineering programs are seeking federal grants for drone research. The University of Alaska, which this winter used drones to gauge ice thickness for a fuel convoy rushing to Nome, paid the high-powered Washington law firm of Patton Boggs $50,000 in the first quarter of 2012 to lobby on “unmanned aerial systems.”

Carnegie Mellon University spent $85,000 during that period to make its case for drone grants to the Department of Defense.

“There is so much potential both internationally and domestically,” said Bronstein-Moffley. “It’s one of the areas it makes sense to be lobbying on and be heavily involved in.”