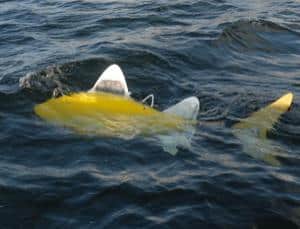 The robots are battery powered and can run for 8 hours between charges (Image: Luke Speller)

There is something unnatural lurking in the waters of the port of Gijon, Spain, and researchers are tracking its every move. It is not some bizarre new form of marine life, but an autonomous robotic fish designed to sense marine pollution, taking to the open waves for the first time.

“With these fish we can find exactly what is causing the pollution and put a stop to it right away,” explains Luke Speller, a scientist at the British technology firm BMT and the leader of SHOAL, a European project involving universities, businesses and the port of Gijon, which have joined forces to create the fish.

Currently the port relies on divers to monitor water quality, which is a lengthy process costing €100,000 per year. The divers take water samples from hundreds of points in the port, then send them off for analysis, with the results taking weeks to return. By contrast, the SHOAL robots would continuously monitor the water, letting the port respond immediately to the causes of pollution, such as a leaking boat or industrial spillage, and work to mitigate its effects.

The SHOAL fish are one and a half metres long, comparable to the size and shape of a tuna, but their neon-yellow plastic shell means they are unlikely to be mistaken for the real thing. A range of onboard chemical sensors detect lead, copper and other pollutants, along with measuring water salinity. They are driven by a dual-hinged tail capable of making tight turns that would be impossible with a propeller-driven robot.

They are also less noisy, reducing the impact on marine life. The robots are battery powered and capable of running for 8 hours between charges. At the moment the researchers have to recover them by boat, but their plan is that the fish will return to a charging station by themselves.

Working in a group, the fish can cover a 1 kilometre-square region of water, down to a depth of 30 metres. They communicate with each other and a nearby base-station using very low-frequency sound waves, which can penetrate the water more easily than radio waves. However, this means the fish have a low data transmission rate and can only send short, predefined messages. “It’s a good solution, but it requires thinking carefully about what data to transmit and how to use that data,” says Kristi Morgansen, a roboticist at the University of Washington, who was not involved in the research.

Navigation relies on a related system that communicates with four “pingers” at the corners of the port, which act much like GPS satellites for the fish. If one fish senses pollution in an area it can call the others to create a detailed map of high and low concentrations around it, helping port authorities to locate the exact source of the pollutant.

Versions of the fish have been working successfully in the lab for a few years now, but trialling them in a real-life port has proved more difficult. Rough weather has often prevented the researchers from venturing out on the waves, though Speller says the fish would be fine as they can simply dive below the water. But depth has also been a problem – the waterproofing on one component is unable to withstand the pressure at 30m underwater, so it requires a last-minute replacement.

Thankfully the fish are fitted with a variety of safety features if something goes wrong, such as airbags that inflate to make the fish surface, and a GPS and cellphone chip in the fin so that a distressed fish can send its location details to Speller’s phone via text message.

Having demonstrated that the fish can sense pollution and communicate underwater, the SHOAL group now plans to commercialise the design and sell it to other ports in Europe and the rest of the world. The prototypes currently cost around £20,000 each, but mass production should bring that price down.

Speller plans to do more than just track pollution, however – the fish’s modular design makes it easy to swap the chemical sensors for other applications. “I like to see the fish as platform for other things that can be done in the sea, such as search and rescue, helping divers, and port security.”

Morgansen says that underwater gliders have proved successful in monitoring open waters, but they cannot move within the tight spaces of a port or harbour. This means nimbler fish-inspired robots like SHOAL’s may be the way forward. “I think the use of agile underwater robots for monitoring water systems will happen in most ports in the not-distant future.”