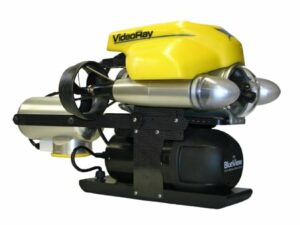 The first release of the SeeByte solution on a VideoRay ROV follows several months of software and hardware development by VideoRay and SeeByte partners. SeeByte adapted their unique navigation software to VideoRay’s ROV control system and hydrodynamics. 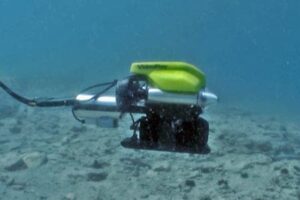 The system, purchased by DSTO, is the first observation class ROV system capable of autonomously following a pre-defined mission or maintaining station, regardless of changing currents and rough sea conditions. Using VideoRay Sonar CoPilot by SeeByte, the system can automatically identify underwater objects with the BlueView sonar, then on command fly to them. It can also track moving objects. In an Explosive Ordnance Disposal (EOD) context, this provides effortless automatic navigation to underwater locations, and therefore can remove divers from minefields and hazardous situations.

“We’re proud of the capabilities we are creating in this market segment” said Bob Black, CEO of SeeByte. “We chose VideoRay because of their dominant market position, and our shared view of the future. We expect their dominance to grow as more of the world’s Navies and Coast Guards – many of whom already standardize on SeeByte software for other tasks – upgrade to this solution. We also expect to see major sales in other markets, particularly Oil and Gas.”

“SeeByte, VideoRay, and Teledyne RDI were already our partners when this project began” added Lee Thompson, CEO of BlueView Technologies. “We knew each was easy to work with, and this is a very good example of a game-changing usage of BlueView sonar systems – particularly with ProViewer Plus.”

“VideoRay’s implementation of our Explorer DVL was unique. The VideoRay hardware development team designed, fabricated, and tested it very quickly” said Bill Kikendall, Vice President and Group General Manager of Teledyne RDI.” MicroROVs are a market that we anticipate will continue to grow rapidly. This joint development represents the first commercial implementation of a DVL in a microROV, and we believe it will result in a variety of new opportunities and applications.”

Scott Bentley, VideoRay’s President and Founder, summed it up. “This is the beginning of a new generation of microROV navigation and control. Up until now, piloting a ROV in challenging conditions, including swift currents and low visibility, required experience and effort. Working with companies like SeeByte, BlueView, and Teledyne RDI, we have integrated the VideoRay vehicle, software, and sensors to create autopilot capabilities that allow new pilots to be immediately successful, and experienced pilots to focus on other tasks. The ramifications are extremely important – both to the owners of more than 2,000 VideoRay systems we have delivered – and to those who are just now acquiring microROVs. It is amazing and noteworthy that four heavyweights of the underwater industry have collaborated on a tightly integrated solution to bring these revolutionary capabilities to market – at a price point never before achieved. User feedback has been overwhelming, and I expect this technology to grow rapidly.”