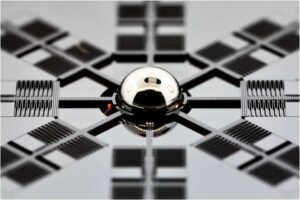 Many U.S. Military systems, such as missiles, rely on the Global Positioning System (GPS) to provide accurate position, orientation and time information while in flight. When GPS is inaccessible, whether as a result of a malfunction or as a consequence of enemy action, information critical for navigation must be gathered using the missile’s on-board sensors.

“Platforms such as missiles rely on GPS for a variety of information,” explained Andrei Shkel, DARPA program manager. “When GPS is not available gyroscopes provide orientation, accelerometers provide position and oscillators provide timing. The new C-SCAN effort focuses on replacing bulky gyroscopes with a new inertial measurement unit (IMU) that is smaller, less expensive due to foundry fabrication and yields better performance.”

The inertial measurement unit sought by C-SCAN will co-integrate both solid state and atomic inertial sensors into a single microsystem. This new IMU would benefit from devices with dissimilar physics, yet complementary characteristics: short startup times, and long-term, stable performance.

Before C-SCAN can be built, research is needed to explore the miniaturization and co-fabrication of atomic sensors with solid-state inertial sensors. Algorithms and architectures are sought to seamlessly co-integrate the components. Those wishing to participate in the C-SCAN effort are encouraged to review the full solicitation located at www.fbo.gov.

C-SCAN supports the Micro-Technology for Positioning, Navigation and Timing (micro-PNT) program, which is developing micro-technology for self-contained, chip-scale inertial navigation and precision guidance that would greatly reduce the dependence on GPS while enabling uncompromised navigation and guidance capabilities for advanced munitions, various military platforms, under a wide range of operation conditions.