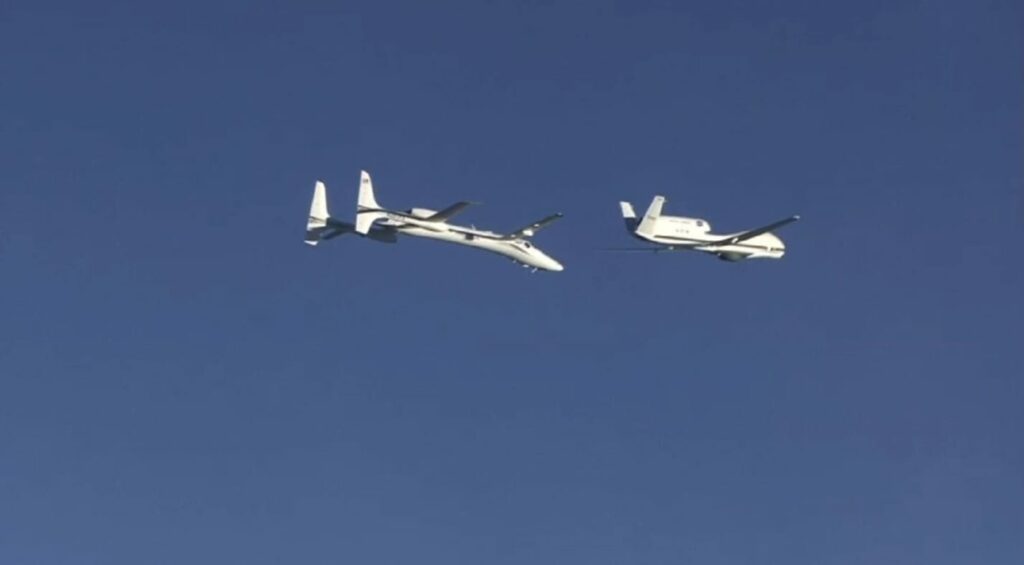 In a key risk reduction flight test, Northrop Grumman’s Proteus test aircraft and a NASA Global Hawk flew as close as 40 feet apart at an altitude of 45,000 feet, an industry-setting record.

The flight test was conducted in the challenging high altitude environment required for refueling of high altitude long endurance (HALE) unmanned aircraft systems (UAS). Wake turbulence between the two aircraft as well as engine performance and flight control responsiveness in the stratosphere were evaluated. Simulated breakaway maneuvers were also conducted. The January flight was key to reducing risks as the program prepares for autonomous aerial refueling of two Global Hawks in the spring of 2012.

“Demonstrating close formation flight of two high altitude aircraft, whether manned or unmanned, is a notable accomplishment,” said Geoffrey Sommer, KQ-X program manager at Northrop Grumman Aerospace Systems sector.  “When you add autonomous flight of both aircraft into the mix, as we will do later in the KQ-X program, you gain a capability that has mission applications far beyond just aerial refueling.”

The $33 million DARPA KQ-X program will demonstrate autonomous fuel transfer between two Global Hawks, enabling flights of up to one week endurance.  KQ-X is a follow-on to a 2006 DARPA Autonomous Aerial Refueling Demonstration (AARD), in joint effort with NASA Dryden, which used an F-18 fighter jet as a surrogate unmanned aircraft to autonomously refuel through a probe and drogue from a 707 tanker.

Northrop Grumman supports the operation of the two Global Hawks used in the KQ-X program under the terms of a Space Act Agreement with its NASA Dryden partner and is responsible for all engineering design, as well as modification of both aircraft.