How Brushless Motors Work & How to Test Them

In this article, Tyto Robotics gives an introduction to how brushless motors work as well as how to select the right electric motor when building a drone, covering:

When building a drone, one of the first steps is choosing the right motor. To get the best performance, it is essential to test multiple motors and select the most efficient one for your design. There are plenty of motors on the market, including many varieties of electric motors that are specifically built for use in drone design. In this article, we will focus solely on electric motors.

Note: We will be using the Series 1580 test stand to gather motor and propeller data for this article. 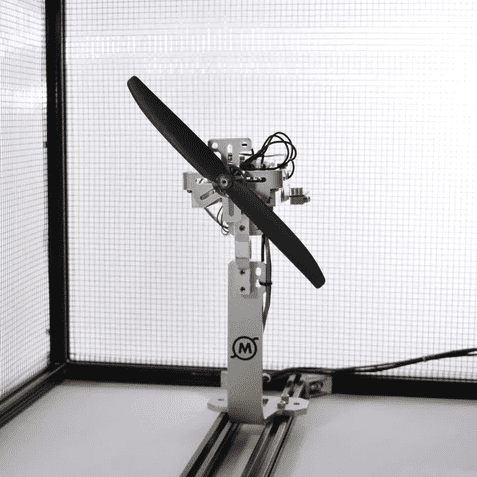 The Universal motor is probably the least favorable for use in a drone. It has low efficiency, bad speed regulation and it performs best at very high RPM, which is not ideal as most drones require precise speed regulations to fly steadily. They are more commonly seen in industrial tools and home appliances, such as drills and vacuum cleaners.

On the other hand, the direct current (DC) motor is very similar to the AC motor, but it is wired so that it uses direct current instead of AC. A DC motor can power a drone, but not as well as another candidate, the BLDC motor.

The BLDC or Brushless DC motor is naturally so named because it doesn’t make use of brushes, unlike brushed DC motors. BLDC motors don’t require brushes as the copper coils carrying charge are directly connected to the stator, unlike brushed motors that use brushes to connect the power supply with the rotor. The brushes themselves are also the main downside to brushed motors, since the brushes wear down and have to be maintained or replaced. Brushless motors have all the characteristics required for great drone design: high efficiency, wide speed ranges and overall high speed-torque capabilities. They are also relatively affordable and require comparatively less maintenance.

2. How Does a Brushless Motor Work?

Before getting into the principle of the brushless mechanism, let’s first take a look at it’s components.

Components of a Brushless Motor: 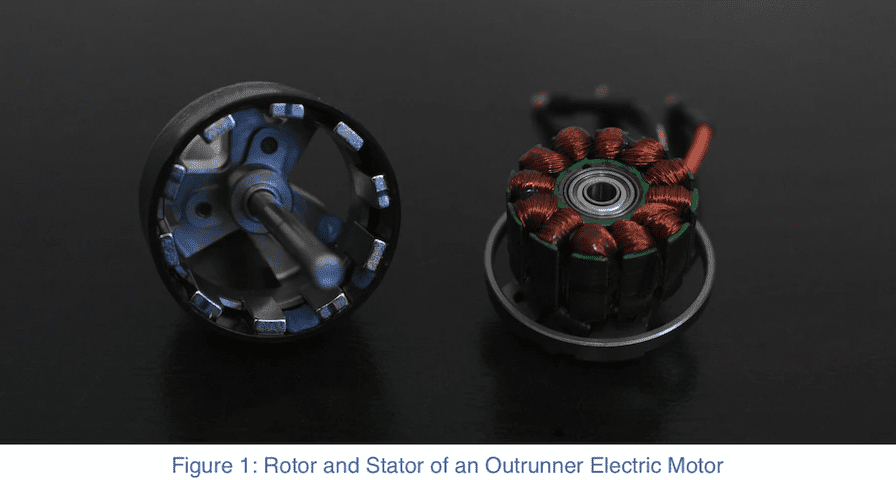 A conductive wire coiled around a metallic base will not act like a magnet, but when a current flows through the wire, it will induce it to behave as a magnet would. This is commonly referred to as an electromagnet. If a negative current flows through that same wire, the magnet now has the opposite effect, it would attract another magnet instead of pushing it away. 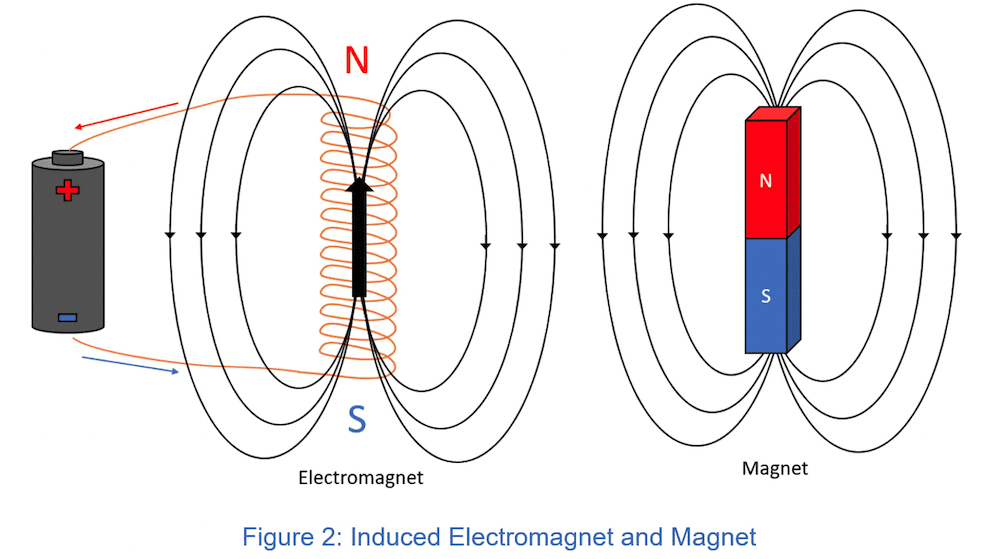 By delivering a three-phase current at a given frequency, the motor will spin at a speed equal to the frequency of that signal. The throttle on a drone’s controller is used for changing the motor’s speed, with a higher throttle input sending a higher frequency signal to the drone. The Electronic Speed Controller (ESC) controls the signal delivery to adjust the motor’s speed according to the throttle’s input. 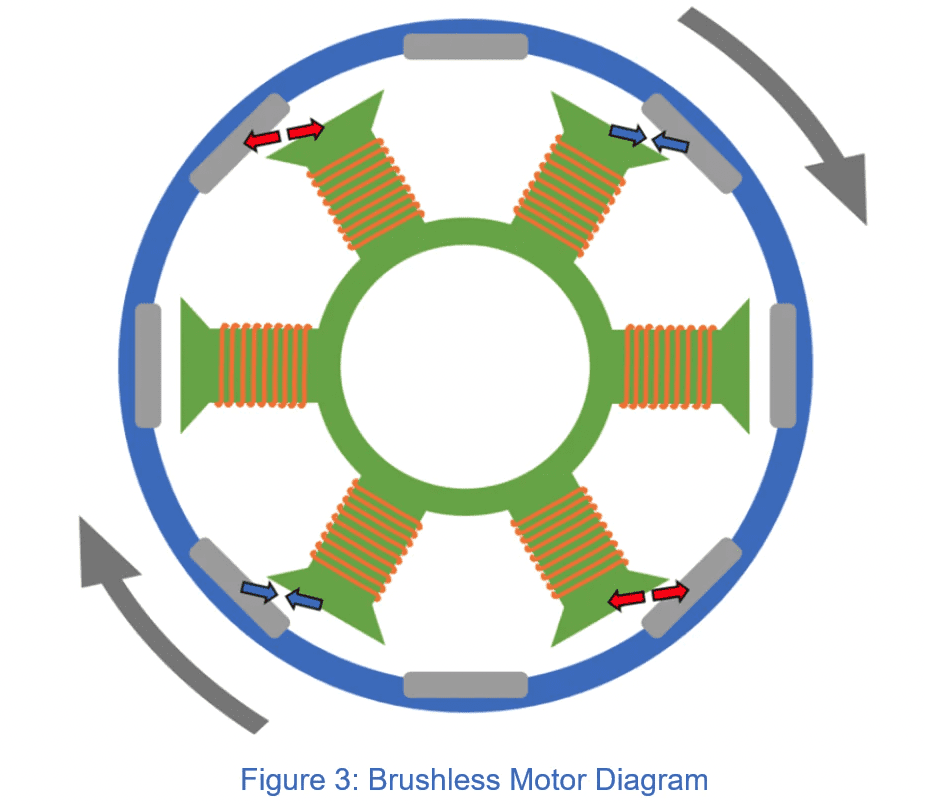 What is the Role of an ESC?

An ESC or Electronic Speed Controller controls the electric motor by delivering electric signals that are translated into changes in speed or even a reversal of the rotation. It uses direct current coupled with a switch system to achieve an alternate three-phase current. This output current can then be modified by changing the rate at which the switches open and close in the circuit. Brushless ESCs need information on the current position of the rotor to be able to start the motor and choose a direction for the rotation. To determine its position, the ESC uses information from the last unpowered electromagnet to measure its induction. This induction varies depending on where the closest permanent magnet is and the closer it is to the electromagnet, the stronger is the magnetic field induced.

The throttle is used to vary the speed of the motor. To do so, the ESC has to adjust the switching frequency based on the throttle’s signal. There are several signal delivery protocols with different performances, the most common ones being Oneshot, Multishot and Dshot. The difference between them is the frequency of the signals delivered. Shorter frequencies allow a faster reaction time. Furthermore, the Dshot protocol is different from the two others because it sends a digital signal instead of an analog signal. This makes the signal more reliable since it is less sensitive to electrical noise and is more precise with its higher resolution. 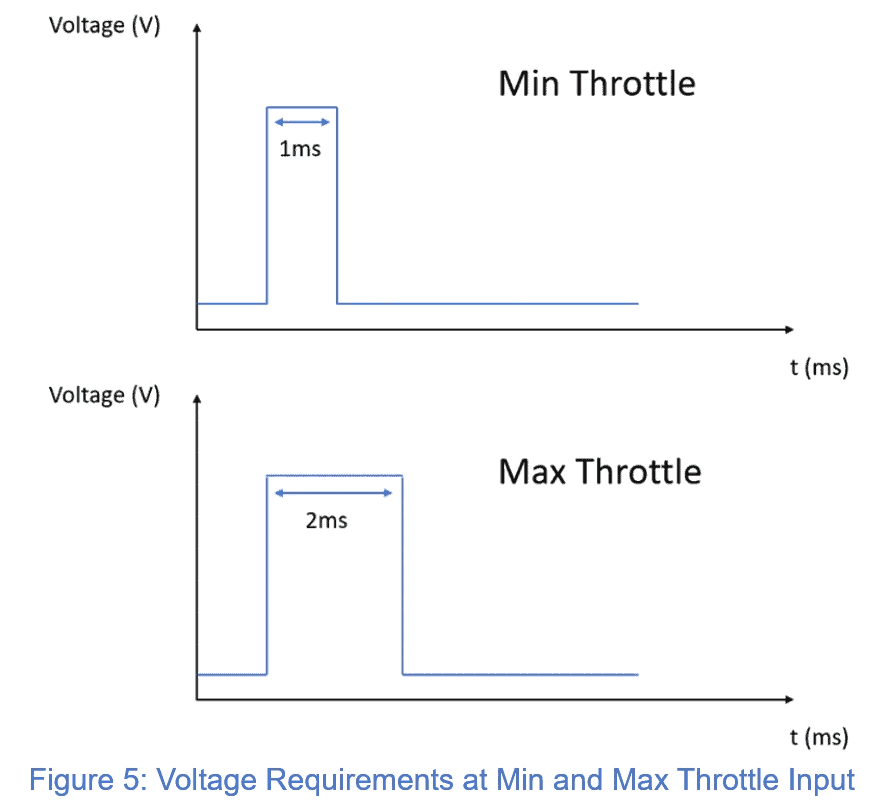 Every brushless motor is made of two main parts, a stator and a rotor. The stator is static, it does not move, and it holds the electromagnets. The rotor is the rotating component that holds the permanent magnets. There are two types of Brushless DC motors: Inrunner and outrunner models. For inrunner motors, the rotor rotates ‘inside’ the stator, or further inwards relative to the motor casing. Outrunner motors have the opposite set-up as the rotor rotates ‘outside’ of the stator or further outwards, see figure 6. Both models have their pros and cons with different applications. When comparing an inrunner and an outrunner of the same size, it is easy to see that the diameter on which the forces are applied is different. This happens because the electromagnets take a lot more space than the rotor carrying the permanent magnets. If the electromagnets are located inside, the diameter is bigger compared to if they are located on the outside (figure 6). In addition to size, the consequence for the motor’s performances are also important to consider. A larger diameter means more torque because the force is applied further from the center of rotation, while a smaller diameter would be better for high RPM. Thus inrunners run best at high speed but generate less torque while outrunners work best with larger propellers because they can output more torque, but spin at slower speed. 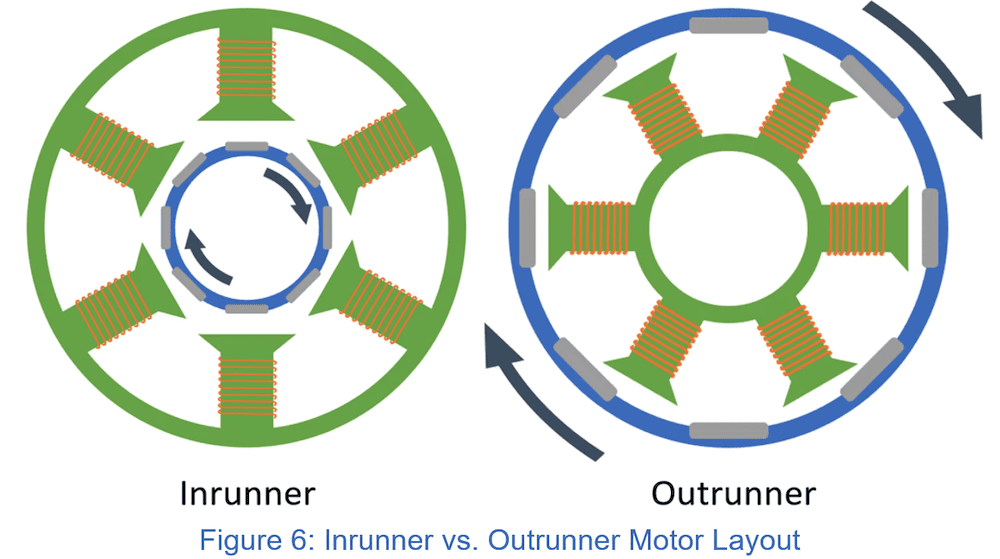 Applications in the Drone Industry:

For the reasons described above, eVTOLs often use outrunners for vertical thrust due to their high torque. Inrunners are more commonly used for ducted fan jets or fixed wing aircraft and for horizontal movements requiring high RPM. This is easy to understand through the Kv value of a motor, also known as its RPM/Volt value. This value determines at which speed the motor will spin if 1 V is sent through it. Therefore, an inrunner typically has a higher Kv value than an outrunner of the same size because, as stated above, the inrunner has a smaller rotor which spins faster for the same voltage. You will often see the Kv value displayed first when browsing brushless motors.

When talking about the performance of a drone, we often think about the flight time. Unfortunately, the most advanced battery technologies can’t compete with gas motors in terms of the weight/energy ratio. The only solution is to carefully select the electrical components that will use the battery charge most efficiently. Many factors can optimize the energy consumption of a battery. One of these factors is the motor’s efficiency. A higher efficiency helps increase the weight/energy ratio, thus getting higher performance from the motor and the drone itself. Testing a motor is crucial to be aware of the differences between a manufacturer’s specifications and the motor’s quality. To demonstrate this idea, we present a comparison of two similar BLDC motors with different price ranges. To compare the motors’ performance, we used the RCbenchmark Series 1580 test stand. It is capable of measuring thrust, torque, voltage, current, RPM and efficiency. The data acquisition is done using the RCbenchmark software. The two motors tested are T2407s of 1500 Kv and 2300 Kv respectively. Both motors spin the same 7-inch propeller with a pitch of 4. 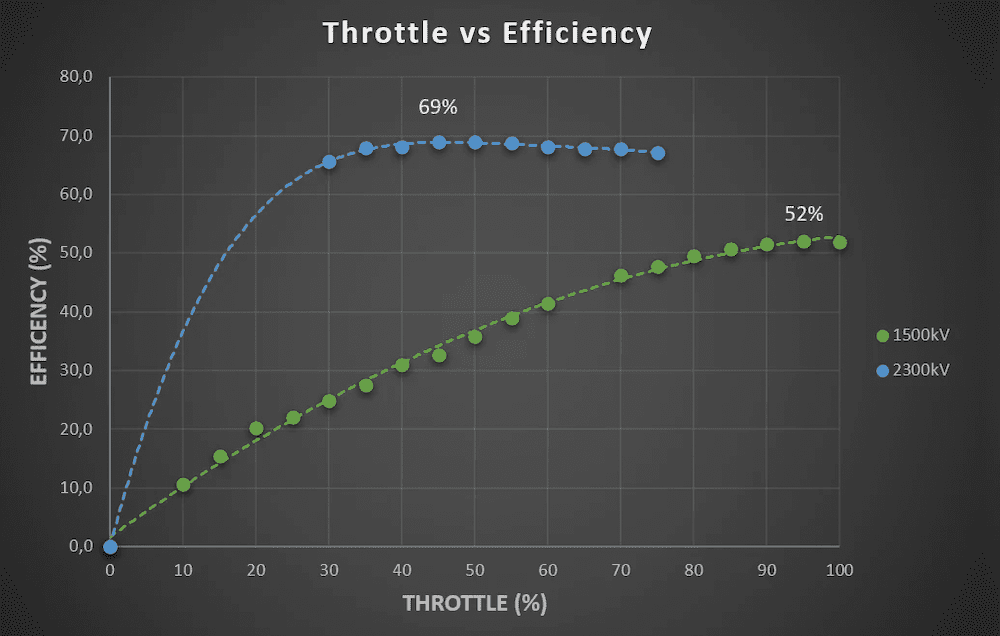 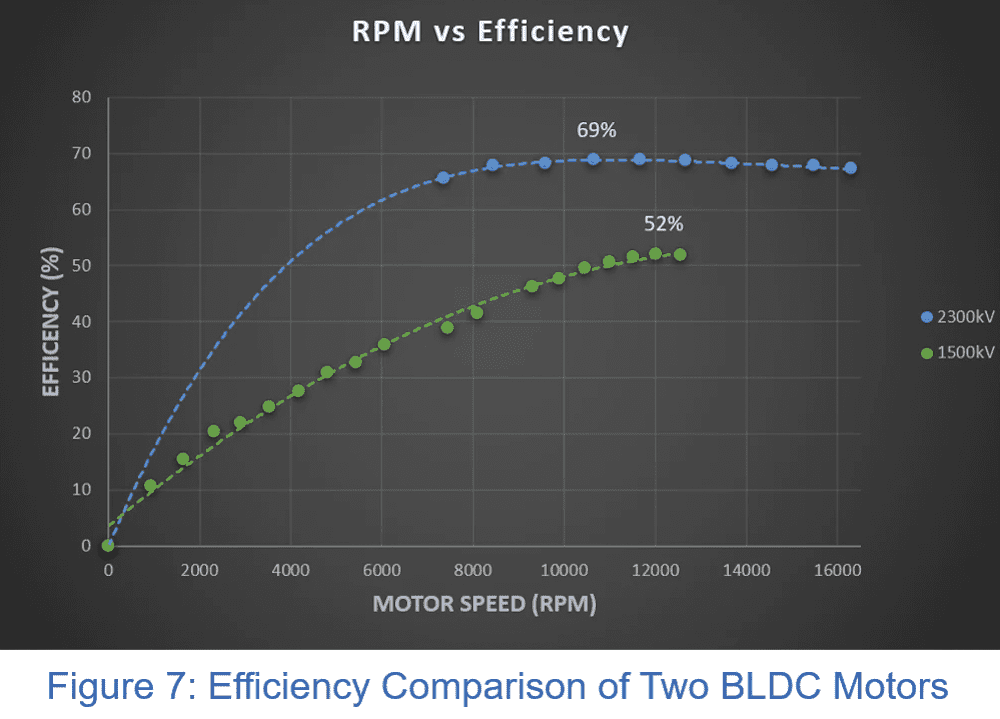 On the other hand, the smaller motor can operate at low speed and would probably be more efficient with a smaller propeller. A drone used for transport would use a smaller motor to be able to stay idle and stable at low speed, while for a racing drone, a bigger motor that would struggle to hover at lower speed would work just fine.

To get a full comparison, we would need to know the purpose of the drone and the RPM it will operate at. It is possible that the 1500 Kv motor is more efficient with a different propeller suited for a different function. Only through testing can we find out.

Finally, let’s talk about what to look for when choosing a motor. The most important characteristic is motor Kv, which describes the rotation speed you get for the power input to the motor. A motor with 2000 Kv will spin at 2000 rotations per minute for every volt sent to the motor. Size is closely related to the Kv. A wide and large motor will often have higher torque but lower Kv and use a bigger propeller, while a thin but longer motor will have high Kv, low torque and would be best suited for a small propeller. This makes sense when you consider that a larger motor operates at lower RPM while a small motor operates at relatively high RPM.

The maximum power of a motor is also something to take into consideration. Exceeding the motor’s power restriction would result in the motor heating up and thus drastically lowering its efficiency or even damaging it. The brand can also change a motor’s performance. For the same Kv value, a motor from one brand may perform better than others. That’s why you should test your motor before building a drone around it.

As a general rule, it is wise to use the smallest (lightest) motor possible without being in danger of overpowering and overheating it. The reason for this is to reduce the excess weight of a motor that is larger than needed. 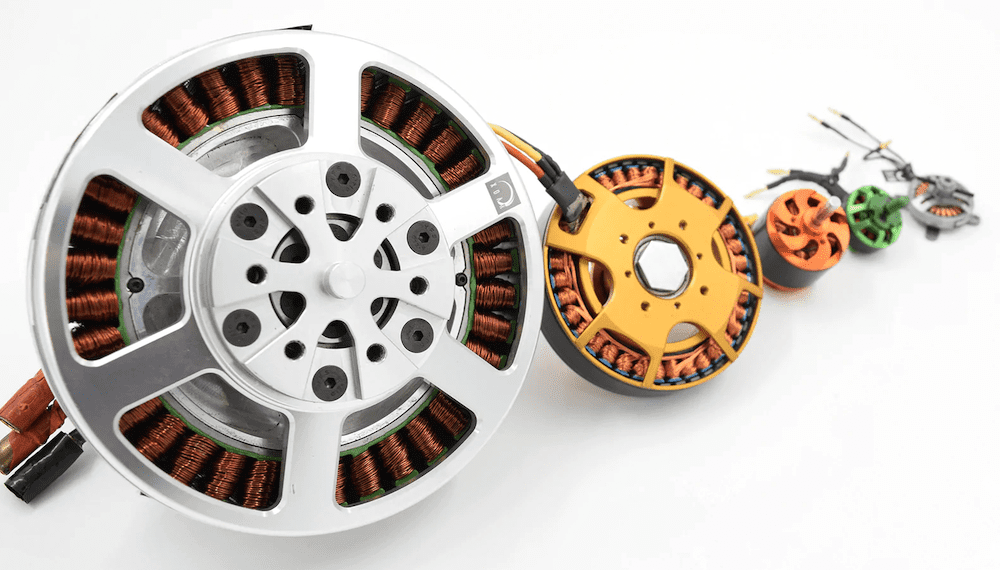 The brushless DC motor is a genius invention that has been a game changer in the world of electric propulsion. Simple and streamlined in design, they allow vehicles like RC cars and drones to operate at high efficiency with maximum control.

In this article we’ve covered how the motors work, the components within them, and the different kinds of BLDC motors. We also covered electromagnetism and how an ESC controls the speed of the motor. This background helps us understand how to maximize efficiency, and how the requirements are different depending on the use for the drone.