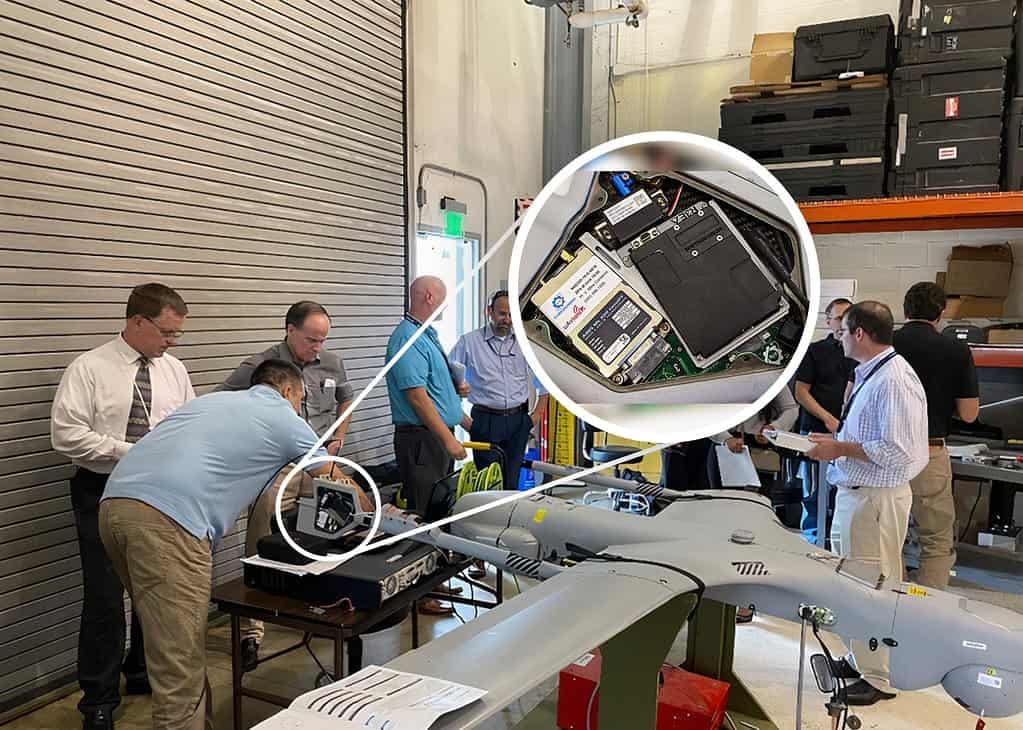 uAvionix has released the following article detailing how it replaced the existing transponder on the US Navy’s RQ-21A Small Tactical UAS (unmanned aerial system) with the company’s low-SWaP ZPX-B Micro IFF, along with an NSA-approved crypto device that supports Mode 5 encryption and decryption.

Earlier this year uAvionix’s RT-2087/ZPX-B Micro IFF Transponder (ZPX-B) became the world’s smallest and lightest AIMS-certified Mode 5 transponder, creating new equipage opportunities for vertical-lift aircraft, where weight savings translate to longer flight duration or heavier payload. Small unmanned aircraft systems (sUAS) especially benefit because size and weight traditionally have been deal-breakers for Mode 5 equipage. We believed the AIMS Mk XIIB certification of ZPX-B in March of this year, however, changed all that. The team of uAvionix and R Cubed Engineering, with encouragement from its Navy and Army sponsors, was determined to prove this. Funding wasn’t available, but our marketing zeal got the better of us.

Our poster child for a demonstration was the RQ-21A Small Tactical UAS (STUAS), a platform built by Boeing/Insitu for the Navy and used extensively for Intelligence, Surveillance, and Reconnaissance (ISR). It currently carries a small, AIMS-certified transponder, the Sagetech XPC-TR-50: one capable of civil Modes A and C only – not military modes 1 and 2, and notably not the modern encrypted Mode 5. Rather than occupy precious payload space in the avionics bay, the transponder resides in the right side of the rear empennage structure – a small, flat open space that communicates with the rest of the platform via an RS-232 connection. The Mode 5 equipage challenge is formidable: how to remove the existing transponder and replace it with the ZPX-B Micro IFF along with an NSA-approved crypto device that supports Mode 5 encryption and decryption.

Two key technological advancements led us to believe our objective was within reach. First was recognition that ZPX-B, despite providing every civil and military mode known to man, was smaller and lighter than the Mode A/C transponder it would replace. But that’s only half a solution. Mode 5 requires a crypto computer, and the smallest mainstream crypto, Raytheon’s KIV-77, is several times larger than ZPX-B. In addition, it’s heavier, weighing 16 oz while ZPX-B tips the scale at 2.4 oz. Fortunately, team-mate R Cubed Engineering is partnered with cyber companies Viasat and WebSec to develop an NSA-approved KIV-79 Micro Crypto, also under Navy and Army sponsorship. It, too, offers SWaP advantage, having a slightly larger footprint and height than ZPX-B, but still smaller than a KIV-77. But would the combination be small enough to fit in the empennage without having to alter the airframe?

It was determined that ZPX-B and the KIV-79 could coexist inside the empennage without airframe modification if positioned side-by-side and carefully oriented. The SWaP challenge had been overcome, yet we – and potential users – really wanted a “-C” appended to our success criteria; i.e., low SWaP-C, where “-C” signifies a low COST to the IFF system as a whole.

One significant and potentially unavoidable cost contributor comes from more messaging being necessary to support all the new transponder modes being introduced, along with their associated cautions and warnings. These message changes and additions have serious ramifications at the Ground Control Station (GCS), where the User Interface (UI) and supporting software must be overhauled to permit enhanced interactivity with the IFF. Could this be accomplished without the added cost of a complete software update to the GCS?

The answer proved to be YES, through careful manipulation of existing Mode A/C transponder commands. A software translator was created that adapts existing commands and status messages to those required by ZPX-B, exercising them while safely in Standby Mode. ZPX-B comes with a Control Application for configuring the system and modifying parameters in real-time. This “App” can be appended to the GCS to make for an effective UI.

Late last month (27-29 July 2021) uAvionix and R Cubed Engineering met its challenge. The venue was the Navy’s STUAS Hardware-in-The-Loop Laboratory in Pax River (Maryland). The empennage of the RQ-21A testbed had its transponder replaced with ZPX-B, a KIV-79 prototype loaded with Mode 5 test keys, and a small translator circuit board. Using a Viavi IFF-45TS as an interrogator, and commanding the transponder via the GCS simulation and ICOM2 control link, it was found all transponder modes – including Mode 5 Levels 1 and 2 – could be exercised, Emergencies were declared, and keys were zeroized on command. Over the course of the three days, this success was demonstrated to a host of interested parties, ranging from Navy and Marine Corp flag officers, to UAS operators, to on-site contractors working for PMA-213, PMA-263, and others.

The applicability of the demonstration’s results – that Mode 5 equipage is now possible for small, hard-to-equip platforms like the RQ-21A STUAS – was not lost on any of the attendees. Opportunity for secure surveillance and the benefit it brings to Combat ID is now possible for existing and anticipated UAS fielded by all components of the Department of Defense. For smaller platforms wanting Mode 5, Micro IFF like ZPX-B may be the only choice. That isn’t the case for larger platforms like the Navy’s Fire Scout, but the SWaP trade-off for greater range, more payload, or more time on station surely bears on mission planning and its eventual success or failure. Whether Micro IFF is chosen out of necessity or as a trade-off, there’s no disputing that a ZPX-B Micro IFF brings the cyber-secure power of Mode 5 to its host platform. Airspace safety is enhanced, and mission success becomes all the more likely.