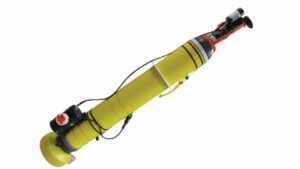 Teledyne Marine has provided NASA’s Jet Propulsion Laboratory (JPL) with three APEX (Autonomous Profiling Explorer) profiling floats, which will be used to study the role that the ocean plays in melting Greenland’s coastal glaciers. The floats are autonomous drifting profilers that acquire water column profile data, such as water conductivity, temperature and pressure, while descending to and ascending from depths of up to 2000 meters.

NASA’s Oceans Melting Greenland (OMG) initiative aims to improve methods and understanding for predicting the rise in global sea levels, and is observing changing water conditions on the continental shelf surrounding Greenland over a six year period. This includes detailed measurements from the narrow fjords around the Greenland coast, which are a critical component in modelling the interaction between the ocean water and the glacial ice.

Teledyne Marine’s APEX floats provide a platform for a variety of sensors, and these units were equipped with RBR CTD sensors, Short-Burst-Data for communication over the Iridium Satellite Network, and special parachutes for air deployment. The floats were deployed using a Basler DC-3 TurboProp aircraft over the continental shelf along the west coast of Greenland as part of the OMG project, and have been carrying out the specific task of measuring water temperature and salinity at different depths on the continental shelf. The floats have been configured to sit on the seabed between descending and ascending, thus limiting the distances that they drift during each cycle, and have also been configured to avoid attempting to surface when they detect the possibility of ice. All three floats have so far stayed within about 15 miles of where they were deployed.

The operational floats can now potentially continue transmitting data over a winter season or more. Profiling cycle times between surfacings have already been increased using commands sent via satellite, in order to extend their lifecycles. The data collected by these floats will provide important future input for studying the role that the ocean plays in melting coastal glaciers and raising overall sea levels.