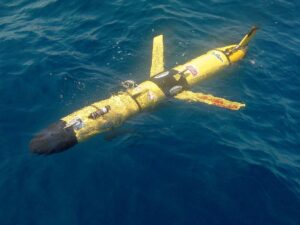 Teledyne Marine‘s Slocum G3 autonomous underwater glider has been utilised in a joint mission, undertaken by the University of South Florida College of Marine Science (USF CMS) and the Fish and Wildlife Conservation Commission- Florida Fish and Wildlife Research Institute (FWC-FWRI), to collect data that will be incorporated into model simulations to better understand red tide bloom occurrence.

The glider, named Stella, is owned and operated by USF CMS and has been collecting the water property data off the coast of Palm Harbor, Florida, for 12 days. The autonomous underwater platform is equipped with sensors that measure water temperature, salinity, backscatter, color dissolved organic matter (CDOM), chlorophyll and dissolved oxygen. The data collection will be used to gain more insight into how Florida red tide blooms are initiated offshore, transported to coastal waters, and eventually terminated.

Gliders propel themselves by changing buoyancy in order to produce forward motion, and their design includes wings that provide stability as the glider moves through the water column. Chad Lembke, USF CMS Project Engineer, further explained: “Gliders provide a robust method for obtaining water column variables over modest spatial and temporal scales for numerous scientific purposes such as hurricane strength forecasting, fisheries, and red tide.” Because gliders are less expensive to operate than ship-based research missions, they are a cost-effective way to fill data gaps.

Florida red tide occurs when high concentrations of the toxic dinoflagellate Karenia brevis are present in the water. K. brevis produces toxins called brevetoxins that can cause massive death to fish, weaken or kill marine mammals, and, when the toxin becomes aerosolized and inhaled, cause respiratory distress in humans and marine mammals.

Dr. Bob Weisberg, USF oceanographer, noted that the Stella transect seen below shows the development of the seasonal thermocline. It suggests that the West Florida Shelf is experiencing some upwelling, a condition when near surface water moves away from the coast and is replaced by deeper water moving toward the coast. If such upwelling persists for a long enough interval, it is possible to change the nutrient state of the entire West Florida Shelf. Dr. Weisberg and other researchers are interested in learning if this change in nutrients is conducive to the formation of a major red tide bloom.

Temperature data collected over the 12 day mission, charted by USF

Glider data can be viewed for free on GANDALF (Gulf AUV Network and Data Archiving Long-term Storage Facility) – developed by GCOOS (Gulf of Mexico Ocean Observing System). While a glider is in the water, GANDALF provides real-time glider positioning information via a map-based interface with a dashboard display, plots of science sensors, Google Earth KMZ file generation, and access to processed data files. Once the glider is retrieved, post-processing of mission data is provided.

A collaborative network will provide greater efficiency in searching for cues that a red tide bloom might be forming or ending, predicting when and where nearshore impacts might occur after a bloom starts, and better understanding why bloom severity varies geographically and over time. Dr. Kate Hubbard leads FWC-FWRI’s Harmful Algal Bloom Monitoring and Research Program, and is partnering with SECOORA, GCOOS, Mote Marine Laboratory, USF, and others to build more routine glider missions into red tide monitoring on the West Florida Shelf.

Bill Lingsch, new U.S. Underwater Glider User Group Coordinator, commented: “This glider operation is a true testament of a research institute and state agency collaborating in collecting in-situ data necessary to understand the dynamics causing and maintaining harmful algae blooms. This leads to forecasts and applications so public awareness (stakeholders/users) can be made possible to mitigate health impacts and/or prepare communities (recreation and commercial) for the potential biological impacts.”