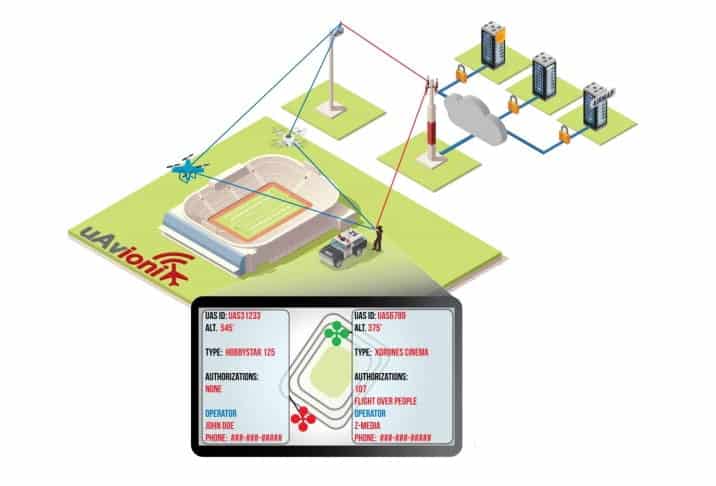 In this article, leading unmanned aviation solutions developer uAvionix discuss the options for developing national or international standards for Unmanned Aircraft Systems (UAS) remote identification (RID). They look at the proposed suggestions and make recommendations for an unmanned aircraft solution that is similar to Automatic Dependent Surveillance—Broadcast (ADS–B) technology used by manned aircraft.

As UAS are adopted in greater numbers by more and more industries, the need for a reliable standard method of drone RID becomes more urgent. RID will allow drones in flight to provide information on their identification and operators that can be received by aviation and law enforcement authorities, thus enhancing security and public safety.

The current standard proposed by international standards organization ASTM for UAS remote identification defines two types of RID – “Network”, and “Broadcast”. A “Network” solution requires an underlying network signal, such as LTE, 5G, or a satellite-based system. This would depend on an infrastructure relay in order to transmit the signal to and from drones and ground stations.

A “Broadcast” method would utilise point-to-point signals without the need for any underlying infrastructure, and would theoretically work anywhere, including remote and urban locations. Broadcast technologies include Bluetooth Wi-Fi, Apple’s Airdrop, and the widely-used ADS-B for manned aircraft. A Broadcast RID solution could be turned into a networked RID solution by building a ground infrastructure of receivers that feed a central UTM (unmanned traffic management) system, although this would not be absolutely necessary. Broadcast solutions also have an advantage in that in Detect and Avoid (DAA) scenarios, they can provide awareness of drones to manned aircraft at altitudes above the useful limit of LTE/5G.

Broadcast remote ID solutions could utilise one of four general types of frequency spectrum, some of which require a license to operate in. The four types are:

Unlicensed – this spectrum includes Industrial, Scientific, and Medical (ISM) bands, such as Bluetooth. Equipment operating in the unlicensed spectrum must not cause interference and must expect interference. There is no Right to Operate, meaning that the spectrum is not legally protected for any specific use, including RID. The unlicensed spectrum carries the lowest cost, but highest risk of all the spectrum options and is also capped at a low power output (4W) to limit its range.

Licensed Shared Primary Use – In this type of system, the expectation is that protection is provided against interference and other licensed users. The underlying system provides coordination and availability consistent with minimizing interference. LTE is an example of licensed spectrum usage shared with other users.

The current standard proposed by ASTM is focusing on Bluetooth as a Broadcast solution. Bluetooth operates in the unlicensed spectrum, thus giving the potential solution no priority or right of operation. Many other devices, including those utilising Wi-Fi, also operate in this crowded general spectrum band, with no legal protection or coordinated system devoted to minimising interference.

uAvionix has proposed a solution, currently known as “UDS-B” or “Unmanned ADS-B”, that addresses the issues with a Bluetooth-based system by utilising a licensed spectrum that is authorized by the FAA (Federal Aviation Administration). The FAA, as well as the FCC (Federal Communications Commission) will have to approve devices that transmit in this range, making it illegal to transmit without authorization, and they can approve based on specific operational use. Since it is not in the ISM-band, UDS-B can transmit at higher power, making it effective for DAA and ACAS Xu and sXu solutions.

The solution is based upon the industry-standard Universal Access Transceiver (UAT) protocol of ADS-B, which benefits from decades of development and aviation industry use and experience. The protocol deconflicts message traffic in densely populated airspace, which will likely be the norm as drone use grows exponentially. Message fields within the protocol can be altered as needed, for example to provide for unique aircraft addresses or attributes like launch location or operator info.

If the solution operates on frequencies close to existing ADS-B (1090MHz and 978MHz), existing ADS-B hardware can be retuned for use on the new frequency, and existing antennas should also be compatible. “UDS-B In” receivers could be installed in aircraft, near airports, or as part of worldwide crowd-sourced hobby networks similar to manned aviation’s Flightradar. If required, translators similar to Traffic Information Service – Broadcast (TIS-B) and ADS-Rebroadcast (ADS-R) systems could be employed to selectively translate a UDS-B target to an ADS-B target without extensive additional development.

The FAA has recently approved uAvionix’s use of L-Band to test low and high power UDS-B prototypes in two U.S. locations, with trials beginning in the near future.

Read more on uAvionix’ website about their proposed UDS-B solution, and the initial FAA-approved trials.