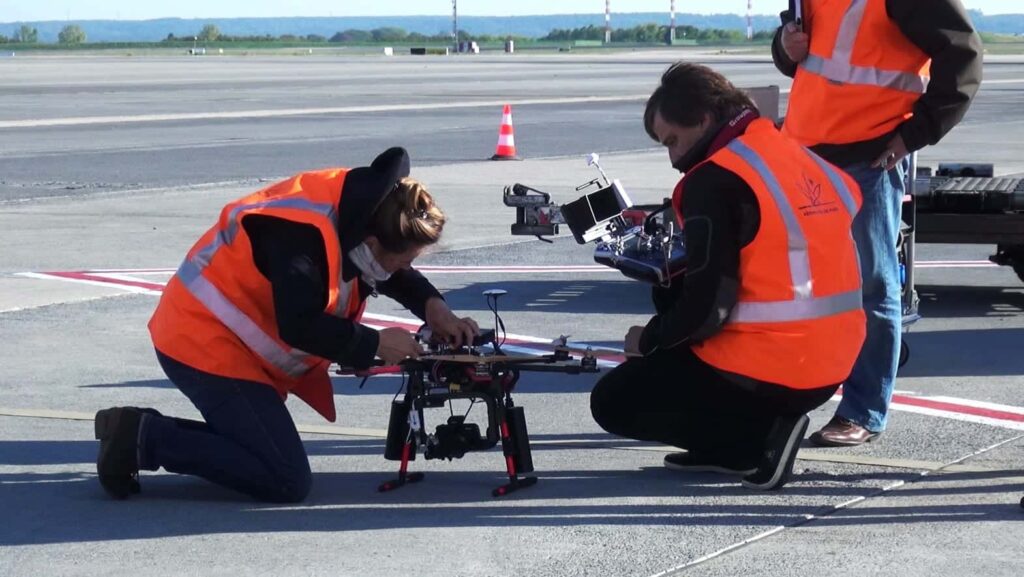 Elistair has confirmed that its Safe-T tethered drone system has been deployed at Paris-Le Bourget airport by Groupe ADP, the French authority responsible for the airport along with others such as Paris-Charles de Gaulle and Paris-Orly.

The Safe-T tethered drone system was utilised to perform maintenance on the airport’s Precision Approach Path Indicators (PAPI), which are blocks of four lights located beside landing runways that provide visual guidance information to pilots for acquiring and maintaining a safe and accurate glide slope on final approach. Placed perpendicular to the runway approach path, generally on the left side, each PAPI unit displays a row of lights emitting red light below a certain angle, and white light over. This instrument can have an effective visual range up to 3 miles during the day and up to 20 miles at night.

While landing, pilots can determine if their approach is too high, too low or on the correct slope thanks to the red and white indicators. For a correct approach, the pilot must observe two red and two white lights. Three or four white lights indicates that the aircraft is too high, while three or four red lights indicates that the aircraft approach is dangerously low.

To maintain operational conditions and precision of the PAPI system, maintenance is usually carried out using flying machines or elevating work platforms. Blocking off the access to the runway, PAPI checking is performed by simulating sinusoidal approaches to verify threshold angles and ensure compliance with regulations. The airport must shut down the runway, incurring downtime, imposing complicated logistics and taking risks by deploying operators in the air and on the runways.

Adopting a different approach to this aeronautical maintenance task, Groupe ADP deployed the Elistair Sate-T tethered drone station. Tethering a hexacopter carrying a x18 zoom handy-cam digital camera, this system allows for easy, safe and fast deployment within the airport. Allowing a precise high-view point over the Paris-Le Bourget runways, the tethered drone was also equipped with a vertical laser module in order to increase the precision of its geo-localization while performing the PAPI checking. Requiring only two operators on the ground, the solution is simple and secured by the umbilical cable specifically built for resisting high traction while supplying the drone with power and transferring high-speed data.

Both live video and geo-localization indicators are displayed simultaneously on an On-Screen Display (OSD), allowing detection of the PAPI light thresholds necessary for performing the recalibration. The integrated GPS/Baidu/Glonass module delivers the position in the horizontal X-Y plane. The drone was piloted in Loiter mode, with the ability to take off and land in an area of diameter less than 1.2m. A laser was also integrated to enhance Z axis precision, with both satellite localization and laser measurement displayed on the OSD.

Using the micro-tether, the Elistair drone flew in a controlled manner from 50m to 100m radius. By transferring the video through the micro-tether, data does not suffer from interference. When checking the furthest distances, the camera zoomed in on the PAPI and defocused; the way the lens renders out-of-focus meant that the PAPI lights appeared in a bigger and colourful diamond shape.

Elistair’s Safe-T tethered drone system provided a solution that was unjammable, had no risk of crashing due to power loss, and flew in a controlled space – all factors that are essential for operation in a busy airport. In direct link with the control tower, necessary secured conditions were satisfied for integrating the tethered drone in the airspace over the runway while the rest of the airport kept running. Deployable at large distances without interrupting the rest of the airport traffic, the tethered drone required only 1 hour full deployment per PAPI checking. Elistair’s tethered drone solutions firmly meet airport maintenance standards ensuring safety, efficiency and flexibility.