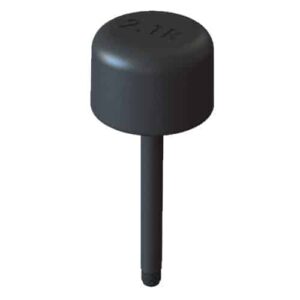 Southwest Antennas, a designer and manufacturer of high-performance RF and Microwave antennas, has announced the introduction of its new small form factor “Turbo Cloverleaf” family of circularly polarized (CP) Omni antennas in 1.98 – 2.2 GHz and 2.3 – 2.5 GHz frequencies. These new antenna products deliver substantial increases in high data rate throughput and signal-to-noise ratio (SNR) in a very compact, rugged radome that measures less than two inches on any side. Each antenna in the new family of products also features an integrated 3” RF coaxial gooseneck assembly with ruggedized non-rotating RF connector options that allows for flexible antenna mounting and positioning with other closely located equipment or co-located antennas.

“First, the Cloverleaf antennas currently available on the market do not typically have a ruggedized Radome or any Radome at all and they just use exposed wiring to create the antenna cloverleaf radiating element structure that is covered with plastisol or similar insulated coating, leaving the antenna easily susceptible to damage. Second, these antennas measure well over 6” in outside diameter making them impractical for installation on a UAV or drone platform. Third, they have poor and improper impedance matching at the antenna feed point and finally they have poor radiation pattern control over frequency due to inadequate RF choking on the antenna’s cable feed.”

“The new Southwest Antennas Turbo Cloverleaf antenna design solves all of these challenging design problems by the implementation of the proprietary new Southwest Antennas design approach which reduces the size of the cloverleaf antenna drastically by over 3X in outside diameter without adversely affecting antenna gain or efficiency. The new design uses SMT components inside the Radome located on the antenna element to tune the antenna performance perfectly right at the antenna feedpoint which is a critical factor in the design of high performance cloverleaf antennas. Other proprietary design techniques are used to maintain excellent radiation pattern control over the entire operational frequency band. In short, Southwest Antennas has solved some huge antenna industry problems with the new Turbo Cloverleaf design and we expect this new design to receive industry wide adoption in a large number of diverse applications where status quo Cloverleaf antenna products will just not meet the system requirements”.

The proprietary Southwest Antennas Turbo Cloverleaf antenna designs offer over 40dB of isolation between two co-located antennas with opposite CP polarizations which is a significant improvement over two co-located vertical or opposite slant polarized antennas. This new design has shown over 50% improvement in data rate throughputs and over 30% improvements in SNR.