In this case study, Doodle Labs discusses how DroneUp has partnered with various drone manufacturers, including Doodle Labs’ own partner Watts Innovations, in order to bring drone delivery services to the public. 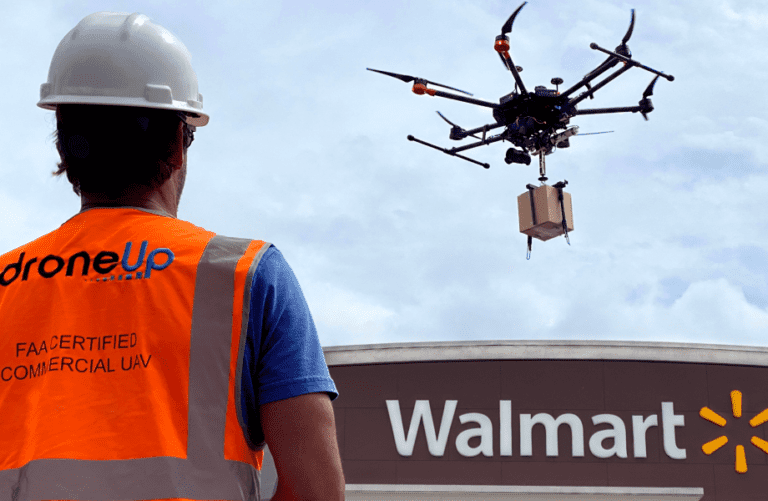 Drone delivery holds a lot of potential – it can help reduce the climate impact of transporting goods, while simultaneously reducing fulfillment time of goods to consumers. One of the biggest drawbacks to the convenience of same-day delivery is the environmental impact of last-mile delivery, which is mitigated with highly efficient, battery powered drone flights. A network of semi-autonomous drones also help reduce the logistics constraint of relying on delivery drivers, which has been a pain point of late.

If you’ve been keeping up with drone-news in the United States, you would’ve heard about DroneUp and how they are partnering with some of the largest retailers to bring drone delivery services to the public.

To best respond to the rapidly evolving regulatory requirements for drones operating in urban spaces, DroneUp has partnered with various drone manufacturers, including Watts Innovations.

Doodle Labs partnered with Watts Innovations early on to enable the long range, reliable communications for Command & Control, telemetry, and HD video streaming required by their drone systems. A robust, high bandwidth datalink ensures connectivity to the drone at all times. The Smart Radio’s ability to identify C&C traffic through Differentiated Services and prioritize it to be sent with optimized radio settings via URLLC ensures the lowest possible latency for Command & Control. Similarly, video is identified, prioritized and optimized radio settings are applied providing seamless video streaming.

Though DroneUp pre-determines flight paths and the drones are set to fly autonomously, a pilot has the ability to take over manual control at any time. This is all to ensure safety as drone technology is more widely adopted.

Some of the biggest challenges facing the deployment of drone delivery are building the public’s trust in terms of safety and privacy, and ensuring the technology can meet the unique challenges that diverse delivery environments represent. For example, in environments with lots of potential obstacles drones could have clear comms in flight, but face challenges near the ground at the delivery site where they also need to transmit video of the successful delivery (video is turned off in flight for privacy reasons). LTE infrastructure points down to the earth and have a ceiling that make them un-optimal for drones in flight and is where broadband mesh links excel.

The Watt’s drones used by DroneUp have both LTE radios as well as the Smart Radio for mesh datalinks. To facilitate seamless transitioning between either radio link, we have developed an LTE Failover feature that will be built into the Mesh Rider ™ OS. In addition to the technological benefit, as regulations for comms on commercial drones still have the potential to change, having redundant comms systems onboard help future proof the drone system.

We, at Doodle Labs, are really excited about the future of drone technology for commercial applications, like drone delivery. We are thrilled to be able to support DroneUp bring this solution to the market. With regulations seeming to stabilize and approvals to operate starting to be given, we’re just at the beginning. It’s an exciting time to be in drone technology.