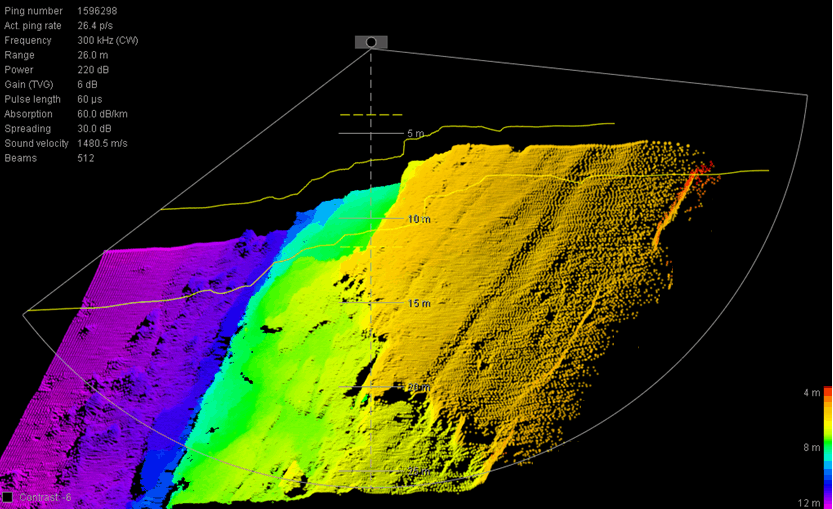 Teledyne Marine has introduced several new features for the company’s SeaBat T20 and SeaBat T50 multibeam echosounders, which are designed for survey platforms such as USVs (unmanned surface vehicles), AUVs (autonomous underwater vehicles) and ROVs (remotely operated vehicles). The new features are part of the free version 2.0 update and are designed to further increase survey efficiency.

With the new v2.0 update, Teledyne Marine has introduced 1024 true beams, as well as always having 1024 soundings, for all single head SeaBat T-series products. The increase from 512 to 1024 beams provides improved target detection capability due to the extremely high data density, and is ideal for projects requiring a minimum of counts in a grid cell.leading to more precise surveys and shorter survey time.

Users are now also able to save the raw S7K files directly to available drives – a function which was previously only available from the back end – thus providing and easy and time-saving setup by doing away with the need to exit the SUI to save files.

Finally, the v2.0 update for the SeaBat T-series enables Teledyne Marine’s unique Normalized Backscatter output for the surface-based SeaBat T20-P and SeaBat T20-R. This license allows users to increase the use of their existing SeaBat T20 with multiple deliverables from a single survey. The backscatter is compensated for the effects of sonar settings, enabling collection of improved bathymetry data and true backscattering estimations at the same time, thereby reducing survey time and costs.

Uni Bull, Product Manager of the SeaBat systems, commented: “With this update we confirm our commitment to continue developing features and performance enhancements to the already world leading SeaBat T-series. v2.0 Update for SeaBat T-series is the best update we have ever produced. It is an update which we guarantee makes your SeaBat T-series an even more powerful survey tool that will make better use of your resources and manpower.”