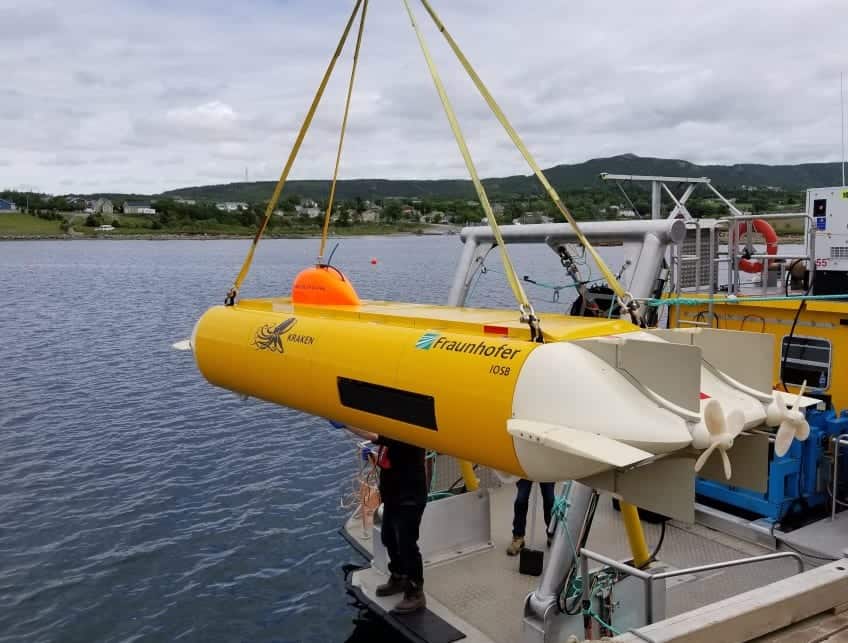 Unmanned Maritime Vehicles (UMVs) are robotic systems which operate both below and above the surface and without an operator on board, and include Autonomous Underwater Vehicles (AUV), Remotely Operated Vehicles (ROV) and Unmanned Surface Vehicles (USV).
UMVs can range from very small vessels to that of a mid-sized ship or small submarine and are equipped with a variety of mapping, communications and navigation sensors. These autonomous systems are used in multiple applications such as naval mine detection, seafloor mapping, underwater asset infrastructure inspection, environmental characterization and others.

Kraken’s Handling Systems Group has already moved into the new location and will continue to build Kraken’s Tentacle Winch and Autonomous Launch and Recovery Systems there. The facility will also be used to field test and support a variety of Kraken’s underwater robotic platforms – including the KATFISH high speed towed SAS system and the THUNDERFISH AUV. Kraken has also installed a dockside remote operations container which is available for use by COVE residents.

Karl Kenny, Kraken’s President & CEO said, “We are extremely pleased to establish our new Unmanned Maritime Vehicles Facility at COVE in Dartmouth. The global UMV market is experiencing significant growth and investment in both military and commercial markets. While most of the today’s global UMV market is military, the adoption trend of UMVs is increasing among various commercial sectors such as oil & gas exploration operators, hydrographic and oceanographic survey organizations, environmental monitoring and search/recovery teams. UMVs are also being adopted by various scientific research organizations for conducting oceanic studies and maritime surveys.”

Jim Hanlon, COVE’s CEO said, “We are now seeing a revolution in unmanned maritime robotics similar to what happened when unmanned aerial drones were introduced in the 2000s. Both military and commercial operators are realizing the missions that can be accomplished with ocean drones and robotics. Maritime entities are becoming very interested in getting a better return-on-investment using drones and not having to put people at risk. That cultural shift is happening across the maritime sector. Kraken brings considerable technology and expertise to the underwater robotics domain and we are delighted that they are establishing Unmanned Maritime Vehicles Facility at COVE.”