Schiebel has announced that its CAMCOPTER S-100 Unmanned Aerial System (UAS) and Airbus Helicopters’ manned H145 have successfully completed a series of Manned UnManned Teaming (MUM-T) flights. Level 5 interoperability was achieved by providing the user onboard the manned aircraft with full command and control over the UAS and its payload, including launch and recovery.

The purpose of this demonstration, which took place as part of a technology partnership between the Austrian Armaments and Defense Technology Agency (ARWT) and Schiebel, was to explore the benefits and challenges of delivering MUM-T flight operations, especially those with highly valuable, mission-enhancing advantages for army aviation. As a true force-multiplier, MUM-T leverages the strengths of both manned and unmanned systems by providing pilots of manned aircraft with the ability to take full advantage of the Intelligence, Surveillance and Reconnaissance (ISR) capabilities of the UAS and thereby significantly improving safety and decision-making in complex, contested missions.

“This is a perfect example of Schiebel’s commitment to staying at the cutting-edge of developments and capabilities,” explained Hans Georg Schiebel, Chairman of the Schiebel Group. “The CAMCOPTER S-100 offers unsurpassed ISR capabilities and as such significantly enhances manned aircraft sensors, which is particularly valuable in complex operations and dangerous environments.” 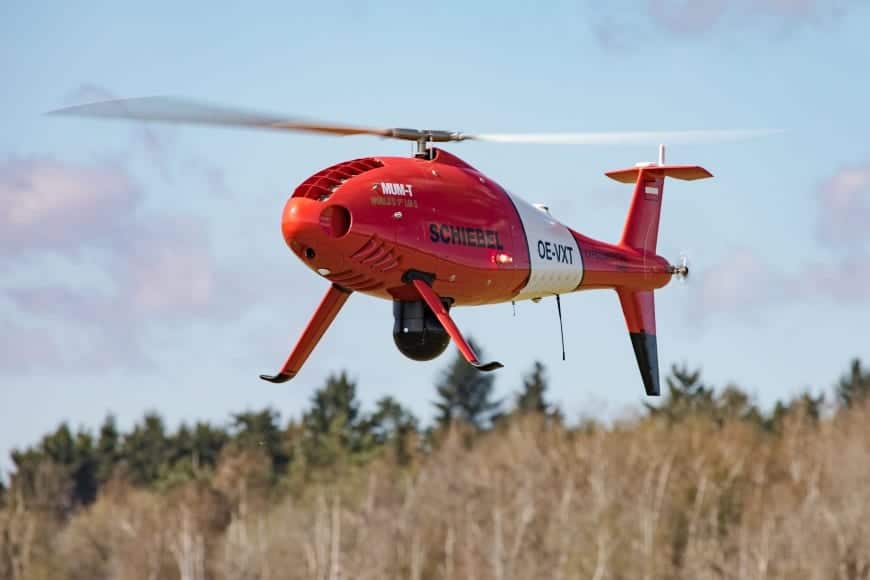 UAS are perfectly suited for providing an aerial overview, operating above manned assets whilst the manned assets benefit from using local terrain. This approach of enhancing coverage and timeliness of information while keeping pilots and manned assets safe enables commanders to maximize the advantages offered by both platforms.

“Manned UnManned Teaming multiplies the capabilities of both systems”, said Mark R. Henning, Program Manager at Airbus Helicopters. “Smaller UAS with vertical takeoff and landing capabilities can, for example, fly around obstacles as trees or buildings closer than a helicopter could. They are able to explore unknown territory and deliver information to the helicopter crew which is operating from a safe position and then step in with the helicopter’s superior effects having received a clear picture from the UAS.”

“Another key advantage of such an approach is improved datalink security,” explains Schiebel’s Chief Technical Officer Chris Day. “The datalink between the manned and unmanned platform can be moved from a static to a dynamic environment, away from the ground, making it more robust and harder to detect.”