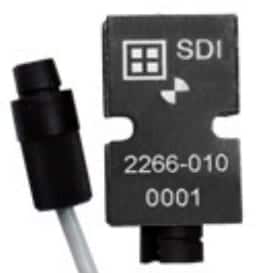 The Silicon Designs model 2266 is expressly tailored for zero-to-medium frequency applications and offers integral amplification and high-drive, low impedance buffering for precision measurements. The accelerometer produces two analog voltage outputs and supports both single ended and differential modes. Signal outputs are fully differential about a 2.5V common mode voltage. Sensitivity is independent from the supply voltage of +8 to +32V. At zero acceleration, the output differential voltage is nominally 0 VDC; at full scale acceleration, the output differential voltage is ±4 VDC. The sensors feature on-board voltage regulation and an internal voltage reference which eliminates precision power supply requirements. The sensor is relatively insensitive to temperature changes and thermal gradients. Self-calibration is quick and easy. Within standard range (2 g to 400 g), most accelerometers continue to operate after sustained exposures of up to 10K g shock and with limited exposure to temperatures above +200°C. Carefully regulated manufacturing processes ensure that each sensor is made to be virtually identical, allowing users to swap out modules with minimal modifications.

The low-impedance outputs of the Silicon Designs model 2266 will drive more than 100 meters of cable, with an overall flexibility that allows them to be used within a wider variety of applications, including wind turbines (where the sensors can be switched out without unwinding 300’ of cable); aircraft flutter testing (where the entire aircraft can be wired, though sensors only placed where needed); train testing; vehicle suspension testing; road tests; general drivetrain testing; automotive and aerospace NVH; and in-laboratory testing environments, particularly where vibration testing requirements necessitate frequent cable replacement.