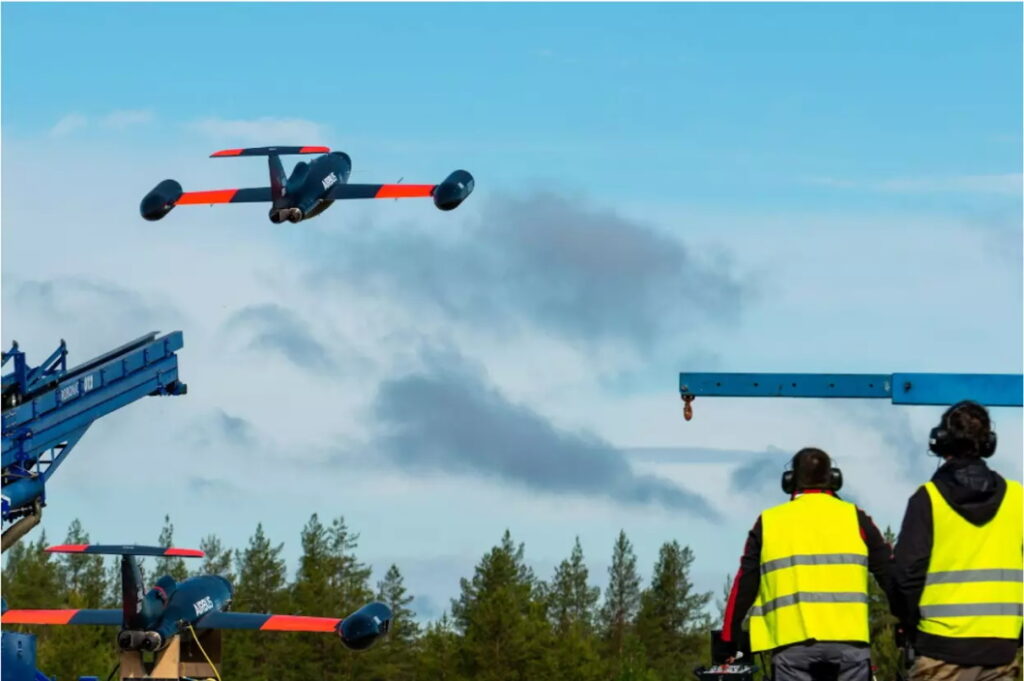 Airbus has led a large-scale multi-domain flight demo with the Future Combat Air System (FCAS) Manned-Unmanned Teaming Demonstrator, during which two fighter jets, one helicopter and five unmanned remote carriers teamed up and accomplished a mission that could occur in real-life situations. The Manned-Unmanned Teaming project will now move to the next phase: further paving the way for FCAS by developing a flying remote carrier (RC) demonstrator in the coming years.

In the demo conducted in late summer 2022, the fighter jets, helicopter and unmanned remote carriers were connected via a meshed compact airborne networking data link (CANDL) that allowed them to seamlessly interact above Rovajärvi, Finland – and help to rid the world of a fictional rogue warlord.

A Learjet 35 from Airbus subsidiary GFD acted as a surrogate fighter, with the crew on board commanding the remote carriers, represented by five modified Airbus Do-DT25 drones. Two of them were equipped with Electronic Support Measures (ESM) sensors from partner company MBDA Germany to detect the fictional rogue warlord’s ground air missile positions. The remaining three RCs were equipped with Electro Optical (EO) cameras that recorded and confirmed the locations of the air defences visually. Additionally, one simulated fighter acting as a command and control aircraft was visible on the screens in the visitor tent where the contractor representatives from the German and Finnish armed forces followed the demo.

While the air defence was eliminated, ground troops requested close air support via a forward Joint Terminal Attack Controller (JTAC) to help them extract the fictional rogue warlord. An Airbus H145M helicopter responded immediately, helping the team to achieve their mission. In parallel, the H145M teamed up with one of the EO RCs keeping an eye on the surroundings and providing the special forces with reconnaissance data. The helicopter crew commanded the RC directly from the cockpit while the video stream of the Do-DT25 was directly transferred to the H145M. The JTAC, located close to the troops on ground, co-ordinated the attack by digital emergency notification (9-liner request) to the helicopter and partly took over command and control of one EO RC to assess the effect of the operation finally.

The MDFD concluded the second phase of the so-called FCAS MUM-T (Future Combat Air System Manned-Unmanned-Teaming) Demonstrator project, funded by the German procurement office BAAINBw. Now the project is going to enter Phase III, which will lead to the maturing of existing capabilities and development of new ones to enable initial operations in the 2030s with existing combat aircraft and remote carriers developed by then. An initial contract for the go ahead has just been signed between Airbus and BAAINBw.

Remote carriers with different sizes and capabilities are vital assets for FCAS, where they will operate in a team with the manned New Generation Fighter and the Eurofighter, connected to a cyber-secured combat cloud network. Operating under the command of a manned fighter aircraft, RCs provide better protection for pilots while enhancing the operational envelope and the ability to act in risky situations.

Jean Brice Dumont, Head of Military Air Systems at Airbus, commented: “With the Multi-Domain Flight Demo, or MDFD, we demonstrated for the first time in Europe how manned-unmanned teaming capabilities and functionalities with up to ten connected assets work in a real-life inspired scenario and under near operational conditions. This is yet another example of how we push boundaries and pioneer technologies so that our customers can fulfill their missions: saving lives and ensuring a better future for us all.”