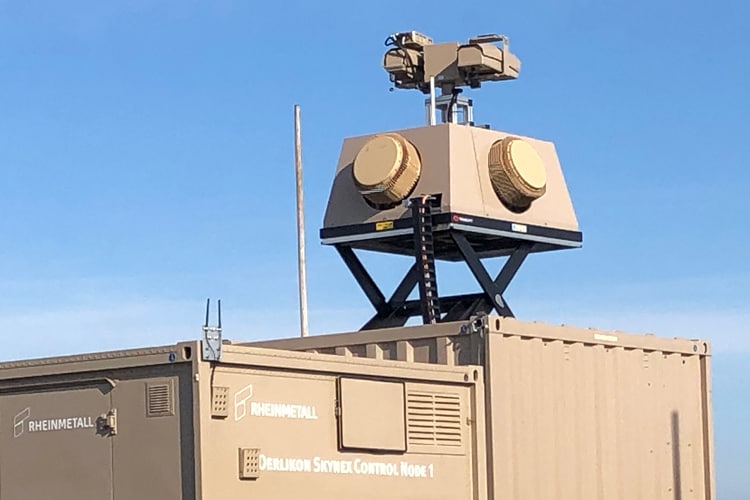 After the training on the system had been completed, the operational capability of the Rheinmetall C-sUAS system was to be tested as intensively as possible under real conditions. For this purpose, a sophisticated test programme was developed, which included both test and realistic attack flights by small drones. The aim was to detect and clearly verify these drones as early as possible using a broad sensor mix. A possible counter to these drone threats was demonstrated through jamming systems, including a tablet-based target queuing device that linked from the higher-level command and control system to the jammer operator.

The large number of drones used – from commercially available drones, to models with jet propulsion, to self-built drones controlled according to the LTE mobile radio standard – clearly showed that modern drone defence can only be efficiently managed in a network.

The Austrian armed forces had selected Rheinmetall’s C-sUAS system and loaned it out for a six-month period of testing and evaluation. In May 2022 Rheinmetall Air Defence AG shipped the latest version of the rapidly deployable system.

Based on the tried-and-tested Oerlikon Skymaster command and control system, the separate C2 shelter is a fully fledged operator workstation. Skymaster delivers an outstanding level of sensor data fusion and multiple operational functions, including scalability to integrated target cueing devices and effectors for different countermeasures as well as links to higher echelons.

Matthias Diem, Vice President of Counter Drones and Aviation Markets at Rheinmetall, commented: “A successful and intensive test week provided a multitude of important insights and experiences. From our point of view, the exercise was an instructive example of how innovation-oriented armed forces, together with industry, can gain the necessary insights to develop and adapt tomorrow’s technologies for possible new threats from the air at an early stage. A big thank you goes to the Air Force and Anti-Aircraft Defence School in Langenlebarn for the great organisation and execution of this forward-looking exercise.”