This pre-production air vehicle, known as the RG-1-A Alpha, is the first autonomous cargo aircraft capable of both vertical and conventional take-off and is designed to carry tons of cargo to any location in almost any weather sabrewing-aircraft-company News By Phoebe Grinter / 18 Oct 2022 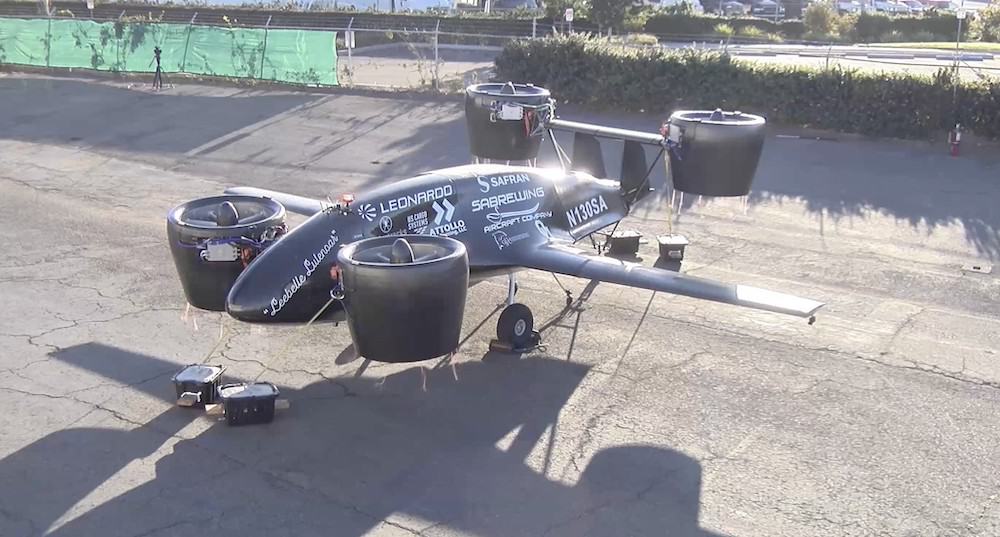 This pre-production air vehicle, also known as the RG-1-A “Alpha” aircraft, is the world’s first autonomous cargo aircraft capable of both vertical and conventional take-off and is designed to take tons of cargo to any location on Earth, in almost any weather. According to Sabrewing, it is currently the best-in-class, highest fuel and maintenance efficiency cargo UAV on the market.

“We are extremely proud to have accomplished this milestone,” said Ed De Reyes, chairman and CEO of Sabrewing. “It’s been a long journey to get here, but we were unwilling to compromise safety or design. Our design and tests teams—and our development partners—invested tens of thousands of hours to make this milestone such a history-making success.”

Improvements to the blades, ducts, and shape of the shroud of the aircraft’s ducted fans allowed each duct to produce 30% more thrust than it was originally designed to provide. These improvements contributed to the aircraft’s ability to lift the record-shattering payload.

The pre-production prototype aircraft weighed just over 2,700 pounds (1,225 kg) for the first flight and is capable of a maximum gross weight (with payload) of up to 3,100 pounds (1,406 kg) at altitudes up to 22,000 feet (6,700 meters) and 200 knots. When taking off conventionally, this aircraft has enough thrust to carry over 2 tons of cargo with the same range, altitude, speed, and efficiency.

“This is only a fraction of what this aircraft can carry. But it proves that we’re able to lift more cargo on our maiden flight than any previous cargo UAV that has ever flown,” said De Reyes.

The Rhaegal aircraft uses a turbo-electric drivetrain based on Safran Helicopter Engines’ turbine-based motor, the Ariel 2E. The Ariel can use 50% Sustainable Aviation Fuel (SAF), and turns an electric generator which produces nearly 1 megawatt of electric energy which in turn then powers electric motors in each of the four ducted fans.

“We’re able to generate more propulsive energy – much more efficiently – with a turbo-electric drivetrain and ducted fans than with batteries or directly driven by the turbine,” said Oliver Garrow, Chief Technology Officer for Sabrewing. “The Safran motor is currently cleared to use 50% sustainable aviation fuel. We expect to be one of the first aircraft manufacturers to use hydrogen when Safran completes testing on their motor in the next couple of years.”

The Rhaegal RG-1-B “Bravo” production aircraft is designed for first, middle and last mile cargo deliveries. According to Sabrewing, it can lift over 10 times more cargo than its closest competitor, fly five times farther, and operate in any airspace – from the most congested city to the most remote location.

Rhaegal is capable of opening new locations and profit centers for its operators, due to its range, fuel efficiency, and ease of maintenance. It is also capable of a range of missions besides heavy lift cargo – including search and rescue, firefighting, disaster relief, medical deliveries (including frozen vaccines), and fuel and water deliveries.

The Rhaegal “Bravo” is currently the only cargo UAV capable of carrying over 10 different Unit Load Device (ULD) cargo containers –the same kind used by airlines for cargo. The Rhaegal can even power refrigerated cargo containers both on the ground and in the air – and has over 675 cubic feet (19 m3) of cargo space.

Sabrewing currently has purchase orders for 28 of the aircraft – destined for the World Food/World Health program – and another 102 firm orders, and letters of intent for over 400 aircraft; these orders represent a $3.2 billion order book over the next six-seven years. Sabrewing also has contracts with the US Air Force to study the use of autonomous cargo delivery to austere environments, and even a demonstration of casualty evacuation for up to 8 injured persons.

As the aircraft nears certification (Sabrewing was the first VTOL company to reach a ‘Basis of Certification’ agreement with the FAA in October of 2019), Sabrewing has also been working with the European Aviation Safety Agency (EASA) to begin certification flight testing of its aircraft. The first 28 aircraft are due to begin deliveries to the first customer by December 2023.