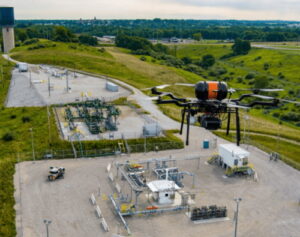 Intelligent Energy has confirmed that its IE-SOAR hydrogen fuel cells have been selected by Shell Pipeline Company for its pipeline inspection operations in the northeastern United States. Using Intelligent Energy’s IE-SOAR 2.4kW on a Harris Aerial H6 drone, the company was able to compare fuel cells with ICE hybrid technology.

Fuel cells provide significantly longer flight times for UAVs (unmanned aerial vehicles) when compared with traditional battery power. This makes them an ideal solution for commercial operators who require extended flight time to capture data over large areas. They also provide many other benefits, including increased operational efficiency largely driven by reduced downtime versus a combustion engine. With reduced maintenance and zero-emission operation, Intelligent Energy’s fuel cell modules offer a unique solution to improving the performance of drones presently constrained by the limitations of batteries.

Reginald Wycoff, Shell Pipeline Aviation Manager, commented: “This is an important step in the future of commercial aerial surveillance. SOAR fuel cell powered aircrafts offer high performance with low noise and zero emissions. The technology has enabled Shell to conduct aerial safety patrols of the Falcon pipeline without the risks inherent to manned aircraft and with minimal impact to the local community.”