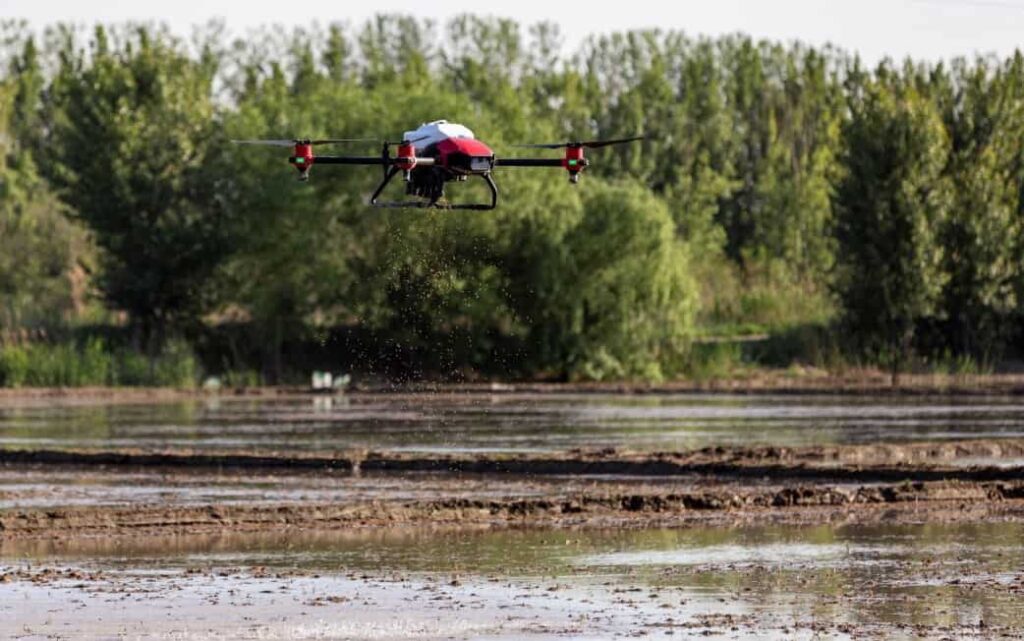 XAG has demonstrated direct rice seeding via unmanned aerial vehicle (UAV), as part of an initiative to offset labour shortages due to an ageing farming population in China as well as the COVID-19 pandemic. The demonstration was conducted in Happy Farms, one of the largest modern agricultural parks in Guangdong province, and contrasted manual seeding versus using a drone to perform the same operation.

Direct rice seeding is the process of sowing seeds directly into fields without nursery cultivation and transplantation of plants. As a more sustainable alternative to conventional transplanting, it avoids deteriorating soil health and intensive water use. However, the process has traditionally only been conducted either by hand or large ground machinery. Many Asian countries with rice as their staple crop cannot utilise machinery such as driverless tractors, due to complex terrain, the small size of many farms, and high costs.

The manual seeding was performed by two workers, who spread 5kg of rice seeds while walking through the waterlogged paddy field. It took them 25 minutes to cover 1,200 square metres of land. XAG’s drone, following a pre-programmed route and dispensing rice seeds from the air, completed the same coverage in only two minutes. Scaling up, this means that one XAG agricultural drone can seed 50,000 square metres of land per hour, which would take 50 to 60 field workers to complete.

XAG’s agricultural drone can be equipped with an intelligent granule spreading system called JetSeed, mounted on the bottom of the aircraft. The unit generates high-speed airflow to project the required amount of seeds accurately into the targeted topsoil, while maintaining optimum spacing and uniform plant density. The technology can also be used to seed at night, resulting in more accurate aerial spreading due to conditions usually being less windy than during the day. Extending the operational period into the night also helps farmers achieve more during the planting season.

XAG has taken drone seeding technology from experimental stages through to commercial adoption across China’s main rice planting areas. Since April 2019, XAG’s drone direct seeding solutions have been applied to over 650 million square metres of rice fields in China’s 11 provinces, and the company’s UAVs have also been used for autonomous fertilisation and crop spraying. Both smallholders and large farm owners have benefited from using autonomous technologies to resolve common challenges such as operational inefficiency, the ageing crisis, and shortage of field workers.