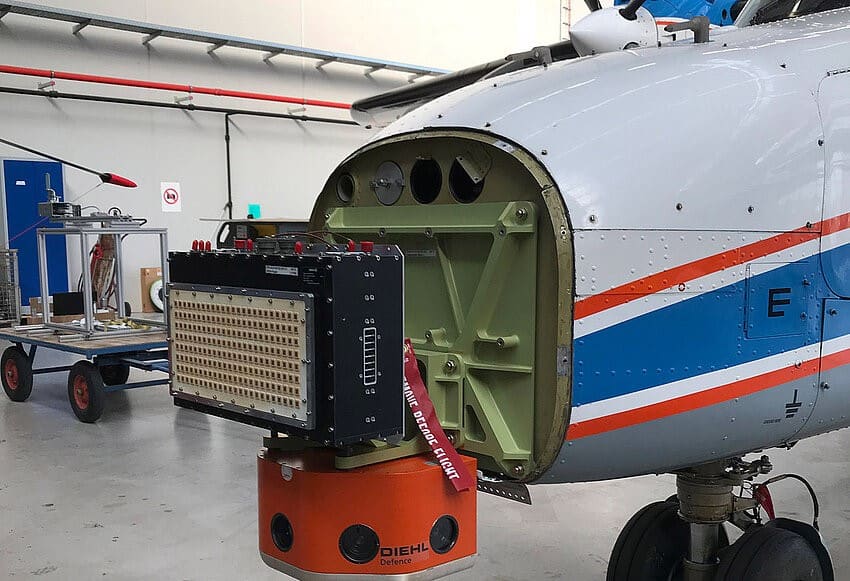 Hensoldt, a manufacturer of sensors for defense and aerospace, has announced that, in conjunction with Diehl Defence and the German Aerospace Center (DLR), it has demonstrated a system that reliably detects objects in the flight path of UAVs (unmanned aerial vehicles). The system, which has been developed as part of a study for the German procurement authority BAAINBw, consists of a radar and a camera, and is a critical step in solving the challenges of deploying drones in controlled airspace.

Hensoldt’s detect-and-avoid radar uses state-of-the-art AESA technology (Active Electronically Scanned Array), which allows several high-speed detection tasks to be carried out concurrently. The system was flight tested on board a DLR test aircraft under real-world conditions, and reliably detected flying objects at an early stage within a range of 220 degrees in front of the UAV at a distance of more than 10 kilometres. The system successfully operated during the day and at night, and in all weather conditions.

The electro-optical camera portion of the system, developed by Diehl Defence, consists of a series of high-resolution cameras that scan the space directly in front of and to the sides of the UAV. The tests demonstrated that the camera system’s advanced real-time signal processing is capable of reliably detecting other aircraft, tracking and evaluating them precisely as well as passing on information on potential collision hazards.

The camera module works at long distances as well as under sub-optimal lighting conditions, and can improve the UAV pilots’ situational awareness by means of a detailed panoramic image. The module is light, compact and flexible enough to be adapted to the requirements of various aircraft.

Find suppliers and manufacturers of Electro-Optical (EO) systems for UAVs >>