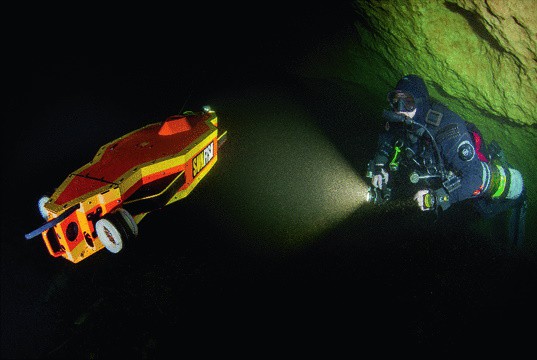 Stone Aerospace, a developer of autonomous systems and robotics technologies, has announced that its SUNFISH Autonomous Underwater Vehicle (AUV) has been used by a team of engineers and divers to explore Dragon’s Breath Cave, a large water-filled cavern beneath the Kalahari Desert. The AI-controlled underwater drone was also used to map the cavern, as well as two other deep cave diving sites in Northern Namibia. Previous attempts by human divers to explore the full extent of Dragon’s Breath Cave, which is the world’s largest subterranean lake, have been unsuccessful due to the significant water depth within the cavern.

The highly maneuverable SUNFISH AUV can hover, fly upside down, do barrel rolls, and pirouette. The system navigates without GPS, radio, or any other outside reference and can produce detailed 3D maps of underwater surfaces using a sonar mapping sensor.

The first location to be mapped was Lake Guinas, an open-air cenote or natural sinkhole. The maps generated by the SUNFISH AUV revealed the cenote to have an hour-glass shape nearly 300 meters long and 175 meters wide at the bottom, with a depth of 133 meters.

Harasib, the second location, is a 40 meter-wide pit in weathered dolomite with a water-filled shaft at the bottom. Equipment was lowered 112 meters into the free-fall pit using winches, and the team members rappelled free-hanging ropes. SUNFISH used a wall-following technique to descend 150 meters into the shaft, beyond the limits of previous divers. Using real-time navigation and mapping, SUNFISH discovered a corridor more than 80 meters wide and 100 meters high, and continued another 300 meters until the giant chamber ended at a depth of 265 meters.

The final objective was Dragon’s Breath. On the first pass, SUNFISH mapped the lake’s perimeter walls, producing a preliminary map that outlined the cross-section of a descending tunnel 175 meters wide and 60 meters tall. SUNFISH returned to this tunnel and explored it for a half kilometer until finding the cave’s end, at a depth of 205 meters. No side tunnels led off of the main passage.

During the month-long expedition, the team produced complete 3D maps of the three sites, which may be used by geologists and resource managers to better understand the hydrology of the extremely arid local environment as well as by divers wishing to visit the sites.

Vickie Siegel, expedition leader, commented: “We came to Namibia hoping to understand Dragon’s Breath better. In the end, we completely explored and mapped three enigmatic dive sites that were considered the deep frontier. SUNFISH is the first autonomous system to truly explore a totally unknown place inside the Earth.”

Find suppliers and manufacturers of AUVs >>