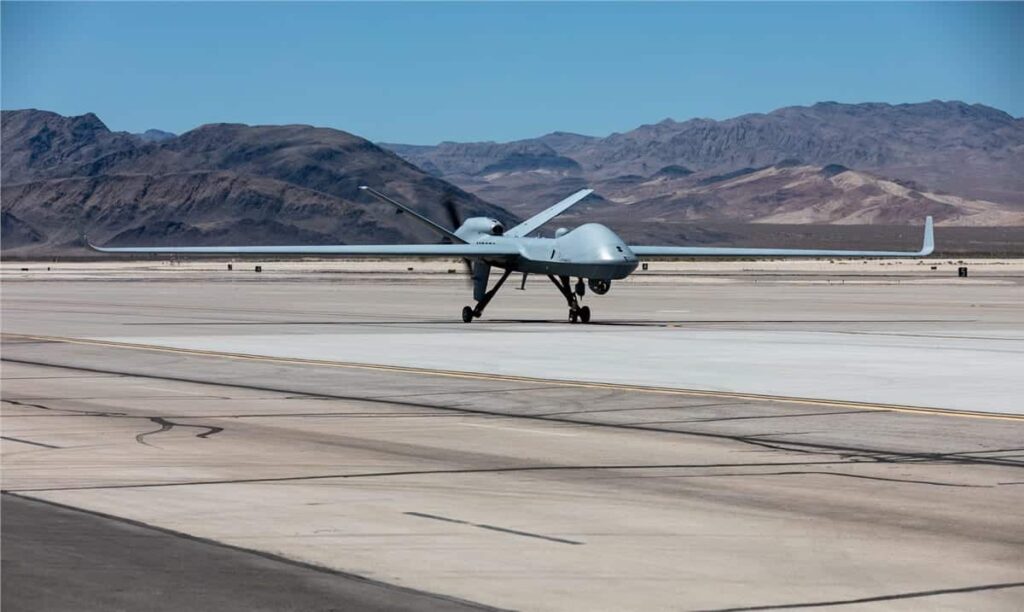 General Atomics Aeronautical Systems has announced that it has given a flight demonstration of its MQ-9B SkyGuardian unmanned aerial system (UAS), the platform upon which the UK Royal Air Force’s forthcoming Protector RG Mk1 unmanned aircraft is based. The demonstration was given to an audience consisting of RAF senior leadership and Reaper UAV operators, as well as guests from the U.S. Marine Corp. and Royal Australian Air Force (RAAF).

The demonstration highlighted multiple features of the SkyGuardian system, such as the Certifiable Ground Control Station (CGCS), automatic takeoff, landing and taxi over SATCOM, Portable Pre/Post-Flight Equipment (P3E) and the Mission Intelligence Center.

The demonstration flight was undertaken from Yuma Army Airfield in Arizona to a landing site in Nevada, without a forward-deployed crew or GCS (Ground Control Station). Automatic landing was performed via a SATCOM data link, and the team at Yuma also handled the taxiing before handing over control to a secondary team using GA-ASI’s Portable Pre/Post-Flight Equipment (P3E). This capability is a laptop that eliminates the need for a forward-deployed GCS, instead allowing a forward-deployed maintainer to use automated pre-flight checklists to reduce pre-flight times by up to 50 percent.

“This demonstration was a complete success and has really built our anticipation and excitement about our new Protector RPA to a whole new level,” said RAF Group Captain Lyndon Jones, Protector RG Mk1 Programme Director. “We witnessed some exciting technologies as part of the demonstration and we’re looking forward to incorporating these innovations into our fleet when we begin taking delivery of Protector in the early 2020s.”

“This flight demonstrated the full global expeditionary capabilities that the Protector will have when it joins the RAF fleet,” said David R. Alexander, president, GA-ASI. “In addition to RAF’s mission sets, the aircraft’s ability to fly seamlessly in civil airspace will allow it to support domestic emergencies such as fire, flood, and security related missions.”