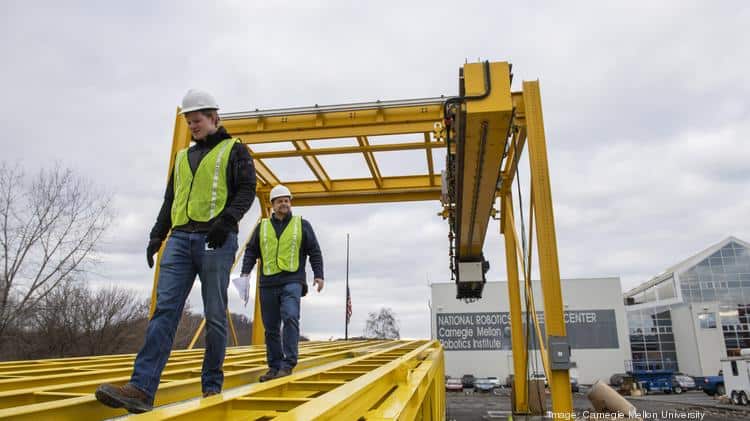 Carnegie Mellon University has announced that its National Robotics Engineering Center (NREC) has constructed the largest robot in the 22-year history of the organization. Its 45-foot-tall gantry, visible from Pittsburgh’s 40th Street Bridge, was built as part of a U.S. Army Corps of Engineers prototyping project to automate its annual mat-sinking operations on the Mississippi River. The massive mats, which consist of concrete blocks wired together, shield riverbanks from erosion, helping to protect levees and ensure safe river navigation.

The prototype robot being built on NREC’s front lawn will serve to test and further develop systems that will become part of the final, much larger robot – a floating factory called ARMOR 1 – that eventually will be deployed on barges on the Mississippi.

The NREC gantry supports a 55-foot-long, 24-ton arm that is about 20 feet above the ground. A carriage suspended from the arm will have two hoists for picking up, transporting and positioning concrete blocks so they can be tied together with wire to create the mats. Each concrete “square” is 25 feet-long, four-feet-wide and three inches thick and weighs 3,600 pounds.

A deck has been installed for moving four rows of concrete blocks as they are tied together; in the final, deployed robot, the conveyance system also will launch the completed mats into the river.

An automated mat-tying system, now being built and tested inside the NREC building in Pittsburgh’s Lawrenceville section, will be added to the outdoor assemblage in mid-2019.

The test system is an unconventional robot and bigger than any previous NREC projects, including a system for the U.S. Air Force to remove coatings from aircraft using three-story-high, laser-equipped mobile robots, and an autonomous mine truck for Caterpillar.

The Corps of Engineers’ ARMOR 1 final prototype robot will dwarf this current test system. It will have six of the 55-foot arms for moving concrete squares. The assembly barge will measure 180 feet long, 75 feet wide and 45 feet high, said Gabriel Goldman, technical lead for the project at NREC. It will produce mats with 35 rows of concrete squares.

“And that’s just the barge with the arms,” he added, noting the system will include several barges. “When you zoom out, this thing is massive – and it’s all floating.”

Mat sinking takes place during the low-water months of August through December and is very labor intensive. Four gantry cranes are used to move concrete blocks from supply barges to a work barge where workers wire the mat together using pneumatic tools. As the mat is being assembled, the work barge inches away from shore to launch the mat along the sloping river banks. The Mat Sinking Unit, which has been in operation for 70 years, is crucial in preventing erosion to the riverbank of the Mississippi River, a vital commercial waterway that drains 41 percent of the nation’s water.

The goal of the automated system is to increase the amount of mat that can be assembled and launched each day, while improving worker safety and reducing operating costs. The new system will add technical skilled jobs such as robotic control operators to the ARMOR 1 workforce.

NREC is a subcontractor to SIA Solutions, and is working with Bristol Harbor Group on the ARMOR 1 project. NREC is responsible for designing the robotic system to automate the entire mat assembly and launching process.

In the latest phase of the project, NREC researchers will use the newly built robot to test each part of the process. That includes automatically picking up, moving and positioning the concrete blocks, as well as detecting when blocks are broken or otherwise defective. They also will be testing methods for automatically tying the mats together.

NREC is scheduled to finish its work by spring of 2020. The full-scale robotic system, to be deployed in 2021, will be built by another contractor.