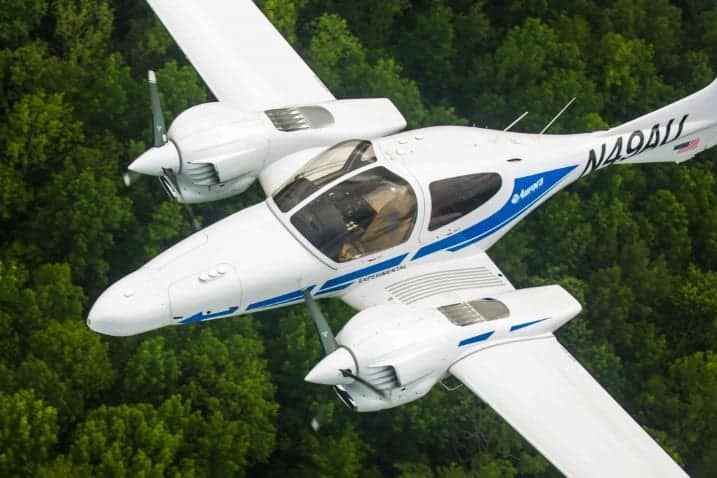 Aurora Flight Sciences, a developer of unmanned aircraft systems (UAS), has announced that it is looking to expand the operational testing of its Centaur Optionally Piloted Aircraft (OPA) system to Lonesome Pine Airport in Wise County, Virginia. Through this endeavor, Aurora aims to continue advancing the Virginia Unmanned Systems Commission’s progress toward making the state a leader in the unmanned systems industry, while also establishing Wise County as a research, development and operational hub for UAS.

Aurora will initially use the Centaur OPA system, a large UAS, to collect a variety of critical data for the state using advanced sensor technologies, and support the Mountain Empire Community College in developing its Aerial Drone Geo-Spatial Mapping and Surveyors course. The Centaur, developed by adding autonomy-enabling technology to the passenger seat of a DA-42 aircraft, provides ultimate flexibility for airborne sensing, testing and training by enabling the aircraft to be flown as a UAS or as a piloted aircraft. In its unmanned mode, the Centaur can spend 14 to 20 hours in flight to conduct missions that are too dull or dangerous for onboard pilots to execute. For the new Wise County operations, Centaur will either be flown on-board by the pilot, or in the Hybrid mode with an on-board safety pilot. Some of the jobs targeted for Centaur include: mapping and survey; predicting and detecting forest fires; performing large-area (multi-state) inspections on roads, railroads, power lines, and waterways; performing mineral and vegetation mapping; and conducting emergency management operations.

With operations in both Virginia and West Virginia, Aurora has a vested interest in advancing unmanned flight operations in the Appalachian Region. “Aurora is poised to ensure Virginia takes the lead in the introduction of large unmanned aerial systems operating in the National Airspace System (NAS), and Wise County would be a great place to expand our capabilities and create jobs,” said Jeff Harlan, Centaur Program Director at Aurora. Harlan was onsite during a recent meeting of the stakeholders and was able to demonstrate the autonomy-enabling technology. In addition to Fly Wisely Accelerator Corp, Aurora will also be partnering with Virginia-based strategic growth group Drone Airspace Management (DAM) and the County of Wise to establish Centaur service at the Lonesome Pine Airport.

Aurora’s Chairman and CEO John Langford was one of the 19 members assigned by Governor McAuliffe to the new Unmanned Systems Commission. ”The Commission showed the incredible potential Virginia has to become a world leader in developing and demonstrating UAS technologies,” said Langford. “Our collaboration with Fly Wisely, DAM and Wise County is an important step toward further developing this potential.”

Aurora is aiming to begin flight operations out of Wise County at the beginning of 2017. In addition to gravity measurement collection missions for the National Oceanic and Atmospheric Administration (NOAA), Aurora plans to provide Centaur to support Virginia geo-spatial work and other contracted services such as supporting Mountain Empire Community College’s planned Aerial Drone Geo-spatial courses.