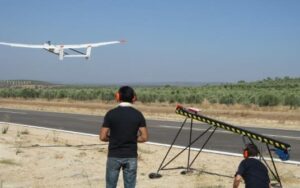 The Andalusian Foundation for Aerospace Development (FADA) has announced that it has begun to develop, through the ATLAS Flight Test Center, a new R&D project directed towards improving the security of agricultural operations, using unmanned aircraft systems (UAS). This initiative follows a collaborative agreement with the Provincial Council of Jaen, Spain, and will make it possible to develop a pioneer system that will use remotely controlled unmanned aircraft to detect intrusions at night on agricultural farms.

Through this agreement, the Provincial Council of Jaen will contribute 90,000 euros to the project, which will allow these unmanned aircraft, through a night-sensor and infrared system, to watch over the farms and avoid robberies or intrusion.

The project, called MOCHUELO, will be carried out first on olive farms located 30 kilometers from the ATLAS Center, in Villacarrillo (Jaen), and will later be used extensively in any agricultural operation. The initiative began its development at the beginning of 2016, and is foreseen to be finished by mid-year.

The convention was signed by the president of the Provincial Council of Jaen, Francisco Reyes, and the general director of FADA, Joaquín Rodríguez Grau, who both highlighted the utility of this project in the scope of all agricultural operations, not only in the case of the olive industry, a strategic sector in Andalusia.

“This is a project that can be very useful in many territories, especially in a province like Jaen with more than 66 million olive trees, in which every year there is a multitude of losses from thefts from the farms,” said Francisco Reyes. He also announced that the Council would finance the 400 meter extension of the ATLAS Center runway, with the intention of facilitating more projects on behalf of aerial businesses and companies that require the use of bigger aircraft.

The objective is to “demonstrate that it is possible for an aerial fixed-wing platform to patrol agroforest terrain at night and that it can detect human presence when there should be none,” explained Rodríguez Grau. He went on to say that the detection of intrusions in these areas is based on the application of thermograpy technology, and that the use of cameras offers a large contrast between human presence and animal presence at night, analyzing the quantity of heat emitted.

Rodríguez Grau remarked that the ATLAS Center provides unique technology for unmanned aircraft flight beyond visual line of sight – more than 500 meters from their operator, something that only can be done in emergency situations or in segregated airspace. It has “the only segregated airspace for certified civil use by the Spanish Aviation Security Agency (AESA), which gives it a great competitive advantage and has converted it into the only company in Spain with the ability to develop this project.”

Rodríguez Grau emphasized the potential of the ATLAS Center for Jaén in particular, and Spain in general, claiming that the unmanned aircraft industry “will become an economic sector of great importance in the coming years as its normative regulation is formalized.”