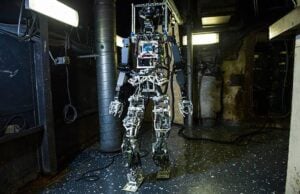 Worcester Polytechnic Institute (WPI) has announced that one of its professors has received nearly $600,000 from the Office of Naval Research (ONR) to develop motion planning algorithms for humanoid robots that are designed to fight fires aboard U.S. Navy ships.

With the award, Dmitry Berenson, PhD, assistant professor of computer science and robotics engineering at WPI, will develop software for a firefighting robot built by Virginia Tech engineering students. The project has also been supported by University of Pennsylvania and Carnegie Mellon University robotics teams. Dubbed SAFFiR (short for Shipboard Autonomous Firefighting Robot), the robot is designed to fight fires and perform other maintenance tasks. SAFFiR — which stands 5 foot 10 inches tall and weighs about 140 pounds — has already been put through an initial firefighting exercise on a ship and will undergo more specialized tests with WPI’s help.

“By using autonomous humanoids, we’re hoping to reduce the need for Navy personnel who have to perform a whole host of tasks and to also help mitigate the risks to people in fire suppression scenarios,” said Berenson.

Thomas McKenna, PhD, a program officer for ONR, said the program was developed to support Navy personnel. “Substantial losses occur when you have a major fire on a ship and can’t suppress it at an early stage,” said McKenna, who added that ships often carry ordnance and other flammable systems.

Naval officials also noted that it can be difficult to keep sailors up-to-date on resource training, but that a robot could be continually reprogrammed with the latest processes.

Berenson said he believes WPI was chosen for this project because of its leadership in motion planning research. “We could contribute our unique experience with motion planning for humanoid robots, which must perform in complicated scenarios,” he said. “Our focus on motion planning for autonomous robots, and not just those that are controlled by tele-operation, also helped us secure the grant.”

Berenson said humanoid robots are not particularly adept at moving in constrained quarters such as a Navy submarine, where they may have to navigate tight corners and stay upright despite rocking decks. “These robots are not good at locomotion in complex environments right now,” he noted.

With that in mind, WPI is testing its algorithms in a simulation of a complex, constrained environment using a virtual model of the SAFFiR robot. The team can plan a variety of movements for the robot and then see if it is able to walk correctly or if it falls down. “Of course,” he said, “just because it works in the simulator doesn’t mean it will work in the real world.”

The WPI team will test its algorithms in the actual robot in controlled conditions within a ship environment mock-up at Virginia Tech. The robot will walk up stairs and perform other locomotion tasks “to ensure the algorithms are generating the correct motion,” Berenson said.

In a later phase of the research, the robot’s capabilities will be tested again aboard the USS Shadwell, a decommissioned U.S. Navy landing ship docked in Mobile Bay, Ala.

In November 2014, Virginia Tech engineering students conducted a three-day demo aboard the Shadwell, culminating in an exercise that positioned the SAFFiR robot in front of a fire. At that time, engineering students said the tethered robot managed to locate and walk toward the fire, grab a fire hose, and blast the flames with water.

With the advanced motion capabilities provided by WPI’s algorithms, Virginia Tech’s robotics leaders hope the robot will be able to demonstrate even greater capabilities.

“The combination of a whole body controller developed by Virginia Tech and the WPI planning software will allow the robot to conduct more complex motions for navigating through the ship and effectively manipulating complex objects like firefighting hoses,” said Brian Lattimer, PhD, affiliate professor of mechanical engineering at Virginia Tech and vice president of research and development at Jensen Hughes, who advised students in the 2014 demo.