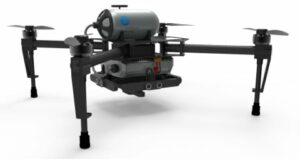 The lucrative market for commercial and enterprise drones is rapidly growing. However it is currently held back by the short range and long recharging times associated with batteries. By combining an ultra lightweight fuel cell stack with a battery, Intelligent Energy’s range extender offers up to several hours of drone flight time rather than the typical 20 minutes maximum flight times seen today. In addition, fuel cells can significantly reduce the downtime currently required for recharging between flights – from one to two hours to an average of two minutes.

“Drones are one of the most exciting new technologies. Even with advanced batteries their value is limited. For commercial use, they need to offer better flight times and range,” said Julian Hughes, Group Business Development Director and Acting Managing Director for Intelligent Energy’s Consumer Electronics Division. “That will all become possible with the release of our range extender platform. A longer flight time coupled with a quick re-fuel opens a wide range of new commercial possibilities for businesses such as drones for inspection of offshore platforms, search and rescue, high quality aerial photography, precision agriculture and parcel delivery and more. Given we also have the ability to tailor solutions to customer requirements, this could completely revolutionize the potential of drone technology.”

In the last decade Intelligent Energy has worked with Boeing Phantom Works to power the world’s first manned fuel cell aircraft in commercial airspace and with Airbus for an auxiliary power unit. For the past 14 months it has independently tested drones with fuel cell and battery hybrid systems. Flight tests were conducted on two configurations: one solely powered by a hydrogen fuel cell, the other powered by a fuel cell-battery hybrid system. A camera was operated on the test flights and was found to record a steady image with no interruptions, a critical feature for commercial drone use.