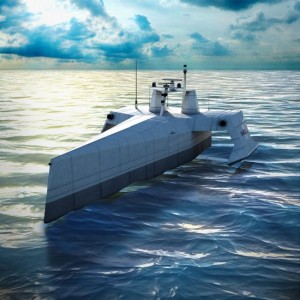 Raytheon Company has announced that it has completed delivery of its latest Modular Scalable Sonar System (MS3), a hull-mounted sonar system, for the Defense Advanced Research Projects Agency (DARPA)’s Anti-Submarine Warfare Continuous Trail Unmanned Vessel (ACTUV) program. The delivery is a culmination of efforts under a subcontract from Leidos, Inc., whose prototype trimaran is designed to serve as the program’s unmanned vehicle.

MS3 marks an improvement in the performance and reliability of proven sonar technologies. It performs active and passive search and tracking, incoming torpedo warning, and small-object avoidance for safer navigation. Sensor data from the system is used in the anti-submarine warfare (ASW) mission to help build a common operating picture for ACTUV. MS3 will be integrated into Leidos’ trimaran for ACTUV, and will deliver these capabilities in an autonomous operating environment.

MS3 features a streamlined inboard electronics suite that can be configured for a range of sonar capabilities, including ASW, anti-surface Warfare (ASuW) and mine warfare, for most hull and bow-mounted arrays and towed systems. It was designed and developed with an open architecture for maximum flexibility, supporting phased upgrades or new construction programs.

“MS3 builds on a legacy of sonar expertise, integrating a host of capabilities in a single sonar system,” said Paul Ferraro, vice president of Advanced Technology for Raytheon’s Integrated Defense Systems business. “MS3 will provide DARPA with exceptional performance – from detection to tracking – from an unmanned platform.”