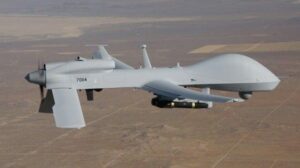 The US Army has announced that it has completed the follow-on test and evaluation (FOTE) on the MQ-1C Gray Eagle unmanned aircraft system (UAS) and Initial Test and Evaluation on the One System Remote Video Terminal at the National Training Center on Fort Irwin, California.

The Gray Eagle, already in full-rate production since 2013, was being tested on the suitability, survivability and effectiveness of all the new “universal” equipment on the system, including the Universal Ground Control Station, Universal Ground Data Terminals, and the Universal Satellite Communications Data Terminal. The test was also focused on transitioning tasks to decrease reliance on maintenance contractors to ensure that Army equipment can be soldier-maintained.

The OSRVT, originally fielded as a quick reaction capability system, underwent its initial test and evaluation as part of the requirement for a program of record system. Fielding of the systems began in 2007 and they have been used in combat in Afghanistan and Iraq.

OSRVT provides soldiers enhanced situational awareness with real-time, full-motion video and telemetry data from all of the Army’s manned and unmanned platforms and is capable of sending video down to the ground. OSRVT’s common software can be integrated with any air vehicle and ground vehicle, tracked or wheeled, for comprehensive situational awareness in real time.

“The OSRVT really is a system that’s been resident in the Army for quite some time because of an operational need response,” said Col. Courtney Cote, Unmanned Aircraft Systems, or UAS, project manager. “Then it was formalized into a program of record and now, as a function of being a program of record, all systems are required to go through an operational test. That’s why it’s here.

“Every weapon system that gets fielded goes through an operational test. We owe that to the soldier to make sure that what we are procuring for them actually does what we intend it to do.”

Cote added that events like the FOTE give the Army a data point by which to evaluate performance and make additional improvements as needed.

The Gray Eagle test is actually more rigorous than its initial OTE, which was completed in early 2013, due to the expanded scope of the test that includes multiple daily missions and split based operations from two sites.

Results from the test will not be available until months down the road, according to Cote. “This test is being done by an independent test organization to ensure that the equipment undergoes the rigor of operational scenarios by soldiers that will be using this capability. The test results will help inform our path forward,” Cote said.

Col. Thomas von Eschenbach, Training and Doctrine Command capability manager of UAS, said that the Army is undergoing a lot of efforts to get unmanned systems integrated into the way the Army fights, which goes beyond the system.

“In this test environment we tend to be very materiel-centric and focused on what the materiel is doing,” von Eschenbach said. “It’s the training. It’s our concepts and doctrine. It’s how we’re organized. And the capability that we have is a direct reflection of not only the capacity we have to field a system but the capability of the Soldiers to employ it and use it as we see fit.”

“I think we have made great strides in the past 10 years. But I think we have a long way to go to get unmanned systems on par with our manned aviation systems and get the most out of their capability.”

The Army is fielding its seventh, eighth and ninth companies with Gray Eagles this fiscal year for a planned total of 15 fielded companies.