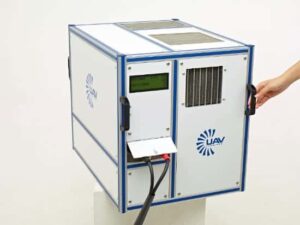 UAV Turbines, Inc. (UAVT), a developer of engine technology for unmanned aircraft, has announced that it will be demonstrating for select companies its fully integrated proprietary propulsion system, which incorporates a small engine, filters, a 3kW generator, control system, display, and gas tank in an enclosed unit that is the size of a mini-refrigerator. This “Engine-in-a-Box” displays system level integration of UAVT’s gas turbine technology.

UAVT recently revealed the technology of a family of gas turbine engines ranging in power from 20hp to 150hp, designed for propulsion of Group 3 and Group 4 unmanned aerial vehicles.

“Successful integration of this full system represents a milestone for us,” says Senior Industry Advisor Peter Bale. “UAVT also previously announced a program to lend engines in the 50 hp class to qualified manufacturers of UAVs so that those companies can evaluate the engine in their airframes, and suggest refinements. Our intention is that this is a straightforward loan, not a joint development program. These engines are to be returned with detailed reports,” Bale adds.

“This is an ‘intelligent’ system,” says Engineering Manager Fred Frigerio. “Gas turbine engines in UAVs have been complicated to operate, as temperatures and pressures change, and different performance is required under changing conditions. All of UAVT’s engines start with the touch of a button, and following steps are choreographed by the electronic brain of the control system, guided by input from sensors.”

“In this turbo generator test platform, we know that power is available for use when the engine cranks up to about 197,000 rpm, and a light on the display turns green. In a UAV system, any engine in this family will automatically adjust operation to achieve minimal fuel consumption, or maximum power response, for example. A remote pilot need not deal with details, just indicate what condition applies. The engines can even be switched off and restarted remotely at altitude,” explains Frigerio.

As UAVT continues intensive development of its propulsion technology, the Engine-in-a-Box turbo generator will be a test bed for different system configurations as well as an effective demonstrator for key features of the technology.