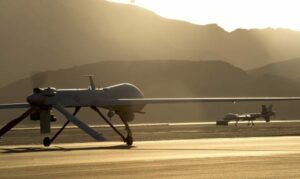 Airmen from 17 different squadrons participated in the third annual 432nd Wing Hunt at Creech Air Force Base, Nev., June 27- July 2, 2014. The crews, which fall under the 432nd Air Expeditionary Wing, were tested on their tactical skills in both the MQ-1 Predator and MQ-9 Reaper remotely piloted aircraft using real world scenarios during the competition.

The annual event gives RPA crews an opportunity to train for a mission set rarely practiced or executed, while also integrating and practicing fundamental tactics with other squadrons from around the 432nd AEW.

“Wing Hunt is essentially a realistic training scenario for the crews to know what to expect in the future,” said Capt. Marcus, 432nd Operations Support Squadron MQ-9 branch chief. “We took realistic training and added a competition, so the crews can earn bragging rights for their units.”

The RPA crews were handpicked by their squadron leadership as the best of the best to compete in both MQ-1 Predator and MQ-9 Reaper employments. These crews consisted of pilots, sensor operators and intelligence Airmen, some of whom flew their mission from their home state via remote split operations.

“Out of the 17 AEW squadrons that participated in this year’s Wing Hunt, seven of those units were based outside of the local area and had crews travel to Creech to participate,” said Capt. William, 432nd Wing weapons and tactics assistant flight commander.

The skills of each crew were tested on every facet of the mission, including mission planning, briefing, flying, execution and precision of AGM-114 Hellfire missile and GBU-12 Paveway laser guided bomb strikes in a given time, and debrief processes. These tests included obtaining all necessary information, learning about potential threats and identifying how big those threats were, preparing ways to mitigate said threats, executing the mission, and debriefing the crews post-flight.

“This year we tried to make it as realistic as possible so the crews can go back to their squadrons and teach others what they need to know to be prepared for what they might encounter in the future,” Marcus said.

Wing Hunt provided an opportunity for geographically separated units to test their skills as well as learn and apply training that can be passed on to those at their home base.

“The event was beneficial for both me and my pilot because it got us involved with other units, coordinating, developing plans and accomplishing more complex tasks with single objectives,” said Staff Sgt. William, sensor operator from the 138th Attack Squadron, in Syracuse, N.Y. “The training we received is invaluable to the success and progress of our missions in the future.”

The annual event put the skills of the RPA crews to the test but also provided useful training for future operations and promoted camaraderie between all participating units.

“Overall the event was a success,” said Marcus. “It demonstrates our capabilities and teaches the Airmen how to properly employ in future environments.”