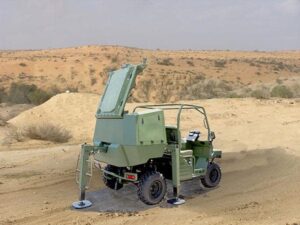 The system, developed by ELTA systems, an IAI group and subsidiary, can be installed on a variety of mobile or stationary platforms such as armored personnel carriers, high mobility multipurpose wheeled vehicles, and all-terrain vehicles.

Green Rock includes a Phased-Array Pulse Doppler Radar which acquires and tracks the trajectories of ballistic munitions such as rockets, artillery and mortars, calculates the point from which they were launched, and predicts the location of the expected impact. This information is reported, via a communications system, to friendly forces to indicate and provide warning of relevant threats. Data can be also sent to precision weapons systems to allow a rapid and accurate response to source of the threat.

Based on field-proven mature systems, Green Rock is highly reliable, provides a high detection range and impact point accuracy. It does not require active cooling, and allows for fast deployment and autonomous operation. The system has already been delivered to the Israel Defense Forces and named Wind Shield by the IDF.

The system will be on display at the Eurosatory exhibition being held between June 16-20 in Paris, France (at IAI’s Booth, E-738).