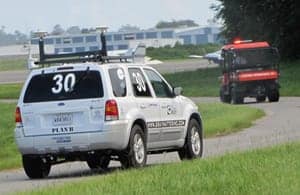 The vehicle is designed to track a loop around an airport, alerting human security patrols of potential problems.

A team of Embry-Riddle students and faculty has successfully tested a fully autonomous perimeter-patrol system at Daytona Beach International Airport, believed to be the first use in the United States of a self-guiding ground vehicle for airport security.

Without remote control or other human involvement, a Ford Escape Hybrid equipped with a GrayMatter Autonomous Vehicle System employed GPS and a scanner with 64 lasers to identify its position and its environment.

The vehicle is designed to track a loop around an airport, creating and comparing high-resolution images and scanner data to detect airport incursions, wildlife, and damage to fences and airport grounds, and then to alert human security patrols of potential problems.

“The technology being developed by Embry-Riddle and tested here at Daytona Beach International Airport represents the leading edge of airport safety and security advancements,” said airport director Rick Karl. “We’re pleased to continue to support and partner with Embry-Riddle to encourage such important research and development efforts.”

Project co-director Dr. Sergey Drakunov, associate dean of Research & Graduate Studies in Embry-Riddle’s College of Arts & Sciences, said, “While the test run at the airport was under tightly controlled conditions, we believe our work opens the door to many important applications of autonomous technology in support of airport operations.”

Co-director Dr. Charles Reinholtz, chair of the Mechanical Engineering Department in the university’s College of Engineering, agreed. “The ground-patrol vehicle, which we continue to refine, has tremendous commercial potential. There are thousands of airports and other facilities where autonomous robotic systems could be used to monitor the perimeter more effectively and efficiently than humans.”

This joint endeavor of the Mechanical Engineering and Engineering Physics departments is sponsored by Ignite, the university’s undergraduate research initiative.

“Being part of a research project like this leads to many exciting career opportunities in a field that combines state-of-the-art technology with the automotive industry – and it’s even more exciting when you realize that the autonomous vehicle industry is expected to grow dramatically over the next two decades,” Alvarado said.