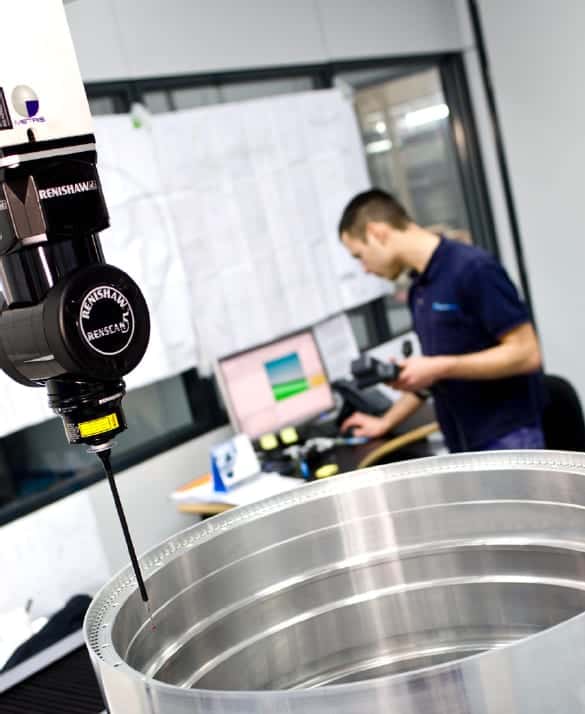 Renishaw REVO Scanning a Large Bore on an Aerospace Component

Renishaw, the global engineering technologies company, has received a Queen’s Award for Enterprise 2013 in the Innovations category for its revolutionary REVO® five-axis multi-sensor probing system. The REVO is used on co-ordinate measuring machines (CMMs) to significantly improve accuracy and throughput when inspecting complex parts including aero-engine blades, automotive cylinder blocks and many types of gears. This is the company’s sixteenth Queen’s Award since its formation in 1973, and its seventh in just ten years.

Sir David McMurtry, Renishaw’s Chairman and Chief Executive, said, “REVO is one of the most technically complex products that we have ever developed and it has been a game changer for the measurement sector. Whilst it has already won numerous international awards, to receive a Queen’s Award for innovation is very special as they continue to be regarded as the UK’s most prestigious awards for recognising commercial and technological success. There have been many people across the Renishaw Group involved with REVO and I would like to thank them all for contributing to an exceptional product that has become the measurement system of choice for many of the world’s leading manufacturers in automotive and aerospace.”

REVO is the only scanning system for CMMs that simultaneously controls the motion of three machine and two head axes whilst collecting workpiece data using its range of 2D, 3D and surface roughness measurement probes. Its novel design incorporates sophisticated laser measurement and electrical signal transmission technology for precise workpiece measurement at extremely high rates of data capture. The five-axis control system removes most of the unwanted dynamic errors associated with machine movement because the measuring head performs most of the work. As the head is much lighter and more dynamic than the CMM, it is able to quickly follow changes in the part geometry without introducing harmful dynamic errors.

The Queen’s Awards for Enterprise are made each year by Her Majesty The Queen, on the advice of the British Prime Minister, who is assisted by an Advisory Committee that includes representatives of Government, industry and commerce, and the trade unions. The Awards are given solely on merit and competition is fierce. The number of Awards presented each year is not pre-set and depends on the quality of the applications received.