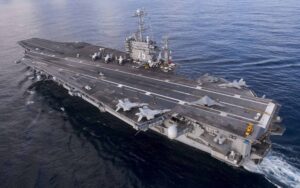 The first aircraft of its kind aboard a Naval vessel, the X-47B was put through myriad trials designed to assess the viability of an unmanned system’s operation aboard a carrier.

Among the multitude of tests, the X-47B was towed using carrier-based tractors, taxied on the flight deck via its arm-mounted control display unit (CDU), and had its digital engine controls tested within environments pervaded by electromagnetic fields.

“The system has performed outstandingly,” said Don Blottenberger, program manager for the N-UCAS Program Office (PMA-268). “We’ve learned a lot about the environment that we’re in and how compatible the aircraft is with a carrier’s flight deck, hangar bays and communication systems.”

“We validated our capabilities on an aircraft carrier,” said Mike Mackey, Northrop Grumman’s program director. “We gained a lot of knowledge that we could never have gotten anywhere else except on a carrier. It was perfect for the team. We demonstrated the program’s maturity and our team’s ability to interact with Sailors and the ship, which was one of the most important things for us to do.”

Mackey said data collected from the aircraft’s performance throughout its two-week test period aboard Truman will contribute to future unmanned aviation programs.

Although the X-47B, as a demonstration aircraft, will never be put into production, Blottenberger said Sailors may one day see similar aircraft aboard ships.

“There are a lot of people aboard Truman that will take this experience with them,” said Blottenberger. “I think that all of this interest will help different programs both manned and unmanned. Hopefully, its impact will benefit future technologies.”

Sailors aboard Truman were offered working experience with the X-47B as crew members directed the aircraft on the flight deck and handled it in the hangar bays.

“I believe our Sailors integrated with the system very easily,” said Tarver. “Getting Sailors to help out and participate was very easy as everyone was curious and excited to work with it. Apart from those minor differences, the aircraft moved much like any other carrier-based aircraft while taxiing under its own power.”

Tarver said he believes aircraft like the X-47B will easily fit into a carrier’s environment in the future.

“Moving the UCAS-D around with a spotting dolly was very similar to how we move other aircraft,” said Aviation Boatswain’s Mate (Handling) 3rd Class Daniel Colon, a supervisor in air department’s V-3 division aboard Truman. “Being the only carrier to have experience with this system so far, I am proud to be among the first Sailors to test this aircraft. I know my whole team feels the same way.”

Blottenberger attributed much of UCAS-D’s success to the Truman crew’s open communication and support.

“Approximately 40 percent of our test team onboard had never been on a Navy ship before,” said Blottenberger. “I think it was eye-opening for the team to see the complexities involved in running and organizing a ship effectively. The Truman has been outstanding. There are countless examples of support from a list of Sailors too long to count from almost every department on board. I could not imagine a better experience for the test team.”

“There was obvious curiosity about the aircraft and tremendous enthusiasm from the entire crew to be part of the revolutionary testing,” said Roth after an event honoring the partnership built between Team Truman and N-UCAS. “These tests were the perfect match of a crew that knows the environment and the operation of aircraft at sea and a team with impressive new technologies. Our crew has taken great pride in being part of Naval aviation history.”

Mackey, a retired Marine with more than 20 years of experience, said he loved being back aboard a Naval vessel to work with Sailors.

“Every minute of the underway was an opportunity to see how far the Navy has grown,” said Mackey. “It’s awesome to see the caliber of today’s warriors. It’s been a great experience for me aboard Truman.”

With X-47B’s deck testing completed, Blottenberger said the aircraft will return to Naval Air Station (NAS) Patuxent River for further testing and is scheduled to embark another carrier in mid-2013.

“I’m a believer that this is only the beginning,” said Blottenberger. “We’re taking UCAS-D into next year with what we learned aboard Truman. We are planning to get it back on a carrier to complete catapult launches, arrested landings and aerial refueling tests. There is a lot ahead for our program and a lot of hard work behind us. I look at Truman as the beginning of future unmanned integration with the fleet.”