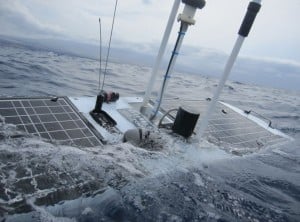 Liquid Robotics®, an ocean data service provider and developer of the Wave Glider®, the first wave powered autonomous marine robot, reports one of their Wave Gliders named Mercury battled through Hurricane Sandy and successfully piloted through winds up to 70 knots, all the while transmitting weather data in real time. One hundred miles due east of Toms River, New Jersey, the weather sensors on the Wave Glider gathered dramatic data from the ocean surface, reporting a plunge in barometric pressure of over 54.3 mbars to a low of 946 mbars as Sandy neared landfall.

“Mercury now joins the fleet of other Wave Gliders that have come through Category I hurricanes to successfully fulfill their missions,” said Dr. Edward Lu, chief of innovative applications for Liquid Robotics. “This is a testament to our robust and reliable technology and proof of its readiness for severe weather data collection.”

Prior to Hurricane Sandy, scientists from Liquid Robotics, Sonardyne, Rutgers University and the Mid-Atlantic region of the U.S. Integrated Ocean Observing System (IOOS®) (MARACOOS) deployed the Wave Glider and two Sonardyne undersea nodes as part of an extensive ocean observing technology demonstration project. This collaborative project demonstrates the use and cost effectiveness of new subsea and surface technology for advanced ocean measurement and enhanced tsunamis detection.

“In the midst of this epic disaster, Liquid Robotics wishes to express our sympathies for those impacted by Hurricane Sandy,” said Bill Vass, CEO of Liquid Robotics. “We are working closely with scientists around the world to use the Wave Glider technology for better hurricane, typhoon and tsunami prediction so we can help reduce the risk to human life and property.