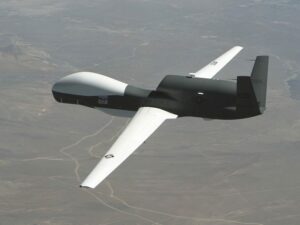 The crash this week of a Navy demonstrator version of the Global Hawk Unmanned Aircraft System on Maryland’s Eastern Shore occurred four days before Northrop Grumman is to roll out its first production version of the $174 million Navy drone and as the Federal Aviation Administration considers whether to allow widespread use of unmanned aircraft in the United States.

The accident Monday marks the seventh known crash since 1999 of a Global Hawk, an aircraft originally developed for Air Force use.

Spokesman Warren Comer said Northrop Grumman still plans to roll out the first MQ-4C Broad Area Maritime Surveillance drones Thursday at an Air Force-owned manufacturing plant in Palmdale, Calif. He said the aircraft will be equipped with Navy-specific systems, including multifunction active sensors that can eyeball the maritime environment with a 360-degree field of view.

The Navy acquired the demonstrator Global Hawk that crashed from the Air Force and did not include other systems incorporated into BAMS, such as a 360-degree electro-optical-infrared sensor, advanced flight control computers and wideband satellite communications systems.

Northrop Grumman won a $1.2 billion BAMS development and low-rate production contract in April 2008 and the Pentagon estimated in December 2011 that the total cost of the program would be $12.2 billion — or 70 aircraft for $174 million each. The Institute for Defense Analyses, in a May 2011 report, said three Air Force Global Hawks crashed between 1999 and 2001 and another went down in 2009.

The Los Angeles Times stated that another Air Force Global Hawk crashed in Afghanistan in 2002. Aviation publication Flightglobal reported in February that the International Security Assistance Force in Afghanistan confirmed one of the two Global Hawks equipped with a battlefield communications relay system crashed in August 2011 in Jalalabad.

IDA reported “there have been intermittent concerns about Global Hawk’s reliability, starting from the early days of the program,” including failures in the communications system in the Block 10 version — the type that crashed Monday — and software problems that resulted in the crash of the Block 20 version in 2009.

An Air Force accident investigation board reported in December 1999 that a Global Hawk operating over Naval Air Weapons Station China Lake in California crashed in March of that year when it picked up an erroneous signal from Nellis Air Force Base, Nev., 250 miles east of China Lake, to terminate its flight. “This caused Global Hawk to go into a termination maneuver involving a preprogrammed, rolling, vertical descent from an altitude of 41,000 feet,” the Air Force said.

FAA kicked off a rule-making process in March to establish six test sites for UAS operation in the United States by this summer and to integrate drones into the National Airspace System by 2015.

Pilots and airliner manufacturers told FAA they had serious concerns about the integrity of UAS data links and warned that unfettered use of drones across the United States could make operation of manned aircraft less safe.

BAMS, unlike Air Force versions of the Global Hawk, is equipped with automatic dependent surveillance-broadcast hardware that ties in with FAA’s Next-Generation Air Transport System, making it easier for flight controllers to track.

Both Northrop Grumman and the Navy have a lot at stake in BAMS’ success. The Defense Department plans to terminate the Air Force Global Hawk program, as it views manned U-2 surveillance aircraft more cost effective.

The Naval Air Systems Command says it views BAMS as integral to its next-generation Maritime Patrol and Reconnaissance Force family of systems strategy, which includes a new manned P-8 patrol aircraft that Boeing Co. is developing based on the commercial 737 jet and the EP-X electronic warfare aircraft.