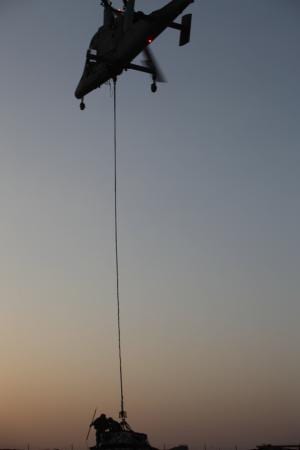 Marine Corps infantry units serve at a multitude of bases, posts and camps throughout Helmand Province, Afghanistan, and logistical support is needed for each and every location.

Until recently, combat logistics patrols were the primary method of delivering supplies such as food, water and gear to some of those remote areas. Marines would pile into dozens of trucks loaded down with cargo and spend hours maneuvering through rough terrain with the threat of enemy contact to reach their destination.

The Cargo Resupply Unmanned Aircraft System is a revolutionary capability that can help to save lives, redirect efforts and more efficiently support the war fighter. The unmanned aerial vehicle (UAV), commonly referred to as a drone, is a platform that could significantly impact how logistics support is provided throughout the battlespace.

“That convoy is extremely difficult; the terrain is the roughest out of all our routes,” said Capt. Robert Hillery, operations officer, CLB-5, 1st MLG (Fwd). “It’s a five-hour trip just to get there, and that’s only if nothing goes wrong. The UAV took ten minutes to arrive at Rankel.”

In addition to the lengthy trip, the terrain also frequently caused damage to the trucks.

“We can’t support the retrograde without our trucks up and running,” said Gunnery Sgt. Kalan Chaloupek, unit movement and control center chief, CLB-5. “The fewer miles we’re putting on our vehicles, the more time we have to invest in maintenance.”

The UAV’s expedience makes it a preferred method for delivering small loads that are needed immediately.

“It can get critical supplies to destinations that are difficult to get to on the ground,” said Hillery.”It’s a huge leap forward for the logistics community.”

Although the UAV cannot carry as much weight as a convoy can, the other benefits provided by the aerial lift makes it a desirable platform.

“We can move a lot more water on the convoy, but when you start talking about time, space and distance, if you were able to cycle enough systems, you can easily move more water in the same amount of time just using more loads,” said Lt. Col. Robert Meade, commanding officer, CLB-5. “And you never have to put a Marine on the road.”

Ultimately, the aerial deliveries could help to save lives by keeping Marines off roads laden with improvised explosive devices. With the Marine Corps shrinking its footprint in CLB-5’s area of operations, the UAV water drops to COP Rankel currently free up combat logistics patrols to assist with the retrograde process.

“There is a large amount of equipment and vehicles that need to be retrograded out of the battlespace as units draw down,” said Chaloupek. “There’s not really a break for anybody.”

Only two KMAX 1200’s are used in Afghanistan by Marine Unmanned Aerial Vehicle Squadron 2 at Camp Dwyer. This time is considered a test run for the UAV platform.

“It’s a great capability,” said Hillery. “Based on its performance between now and the end of VMU 2’s deployment, the Marine Corps will analyze it and determine if it will become [permanent].”