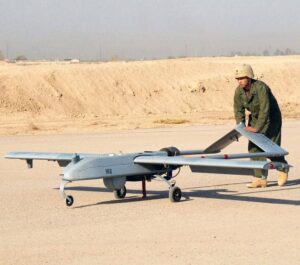 At first, UAVs were owned, operated and serviced by the armed forces. Then, faced with shortages of available equipment and personnel to provide critical intelligence, surveillance and reconnaissance (ISR), the U.S. military started to use contractors to help maintain the rapid pace of operations.

Several years ago, the decision was made to go one step further, with contractors taking complete responsibility for the systems, charging an hourly fee for video feeds of locations provided by their customers.

Now, the turnkey solution to UAV reconnaissance may be catching on: The U.S. State Department wants to contract out surveillance over the U.S. Embassy in Iraq, and military use of the mechanism is growing.

Companies such as AAI, an operating unit of Textron, are betting big on the growth of the burgeoning industry, changing the company’s focus from production to a complete service business.

“We have a lot of capital equipment now,” said Steve Reid, general manager of AAI Unmanned Aircraft Systems. “It is an interesting and different business model for us.”

AAI, headquartered in Hunt Valley, Md., builds, maintains and even flies the UAVs, with the customer providing an overseeing officer to guide the missions and soaking up the video feed the AAI team provides. Aside from assigning areas for surveillance, AAI personnel, who have been building UAVs for more than two decades, run the show. The UAVs are not armed, but provide critical data to guide operations on the ground. The company has won two recent competitions for turnkey services, one with the Navy and another to support special operations forces, with a combined potential value of nearly $1.5 billion. But that potential value includes no guarantees. The customer, while typically obligated to a minimum number of hours, may come nowhere near that maximum dollar figure.

“At the moment that we deliver that video product, the meter starts to run and we earn fee on a per-hour basis,” Reid said.

“It is more cost effective for the customer, and the rationale for that is that they only buy what they need,” Reid said. “It’s an a la carte situation.”

‘Buying the Results’ Because the contractor is constantly seeking new work in the form of missions, performance is strongly encouraged, said Jacques Gansler, director of the Center for Public Policy and Private Enterprise at the University of Marylandand former U.S. undersecretary of defense for acquisition, technology and logistics. “Here, you’re buying the results,” he said. “In this case, the contractor has a huge incentive to do a good job. It’s performance based, results oriented that they’re getting paid for. They’re not getting paid to deliver a piece of equipment, but actually being paid for their results.”

To that end, AAI is doing its best to provide a rapid stand-up capability.

“Once you’re onboard, you have a contract vehicle, they can rather quickly turn on a new site,” Reid said. “We have a response time of about 90 days that we would be fully operational.”

With that quick response time and complete management of the UAV systems comes a responsibility to carry substantial overhead, and risk.

“Just like any other business deal, you’re going to allocate a certain amount of funding to capital investment, and of course there’s going to be a payback over time for that capital investment,” Reid said. “The question is, do we see a growth in that market, and purchases of our technology through that method, and we do.”

The O&M Alternative The transition to a service approach has another benefit for the military customer: The cost of the contracts can be taken from the operations and maintenance (O&M) account, as opposed to the procurement account. While procurement accounts typically are hard hit by defense spending reductions, O&M has historically fared better, Gansler said.

The fact that O&M spending tends to be less scrutinized also serves as a benefit, Jim Hasik of Hasik Analytic said.

“That’s the thing, they can just bury it,” he said. “Nobody knows what’s in the O&M account.”

But Gansler cautioned that much of the cost of maintaining UAV operations is already in the O&M account, even if the equipment cost is paid through procurement.

“In many ways, you are replacing O&M dollars with O&M dollars,” he said. “If you needed those 12 analysts, or the government people to be doing the flying, or the analysis or maintenance, those are all O&M people also.”

The emphasis on moving procurement dollars to service arrangements isn’t limited to the UAV arena and has become a growing trend in contracting, Gansler said.

“Think about communications satellites. We used to buy the boosters and the rockets and the stations, and the alternative is that you simply rent a channel in space as a service,” he said.

AAI hopes to capitalize on the growth in demand outside the military market, although a large number of policy and legal hurdles remain, with questions even surrounding the State Department’s solicitation, Reid said.

“I’m not sure that model [State Department’s solicitation] is ready for prime time yet, but it illustrates the growing interest that a number of agencies have in the use of the technology, and acquiring that technology through that business case,” he said.

And AAI is not limiting itself to overseas work, supporting changes to FAA regulations to permit the use of UAVs domestically.

“The FAA has been challenged to grant some access by 2015, in the FAA authorization bill that was passed this past year,” Reid said. “Then we will be able to offer this model to a much greater customer base.”