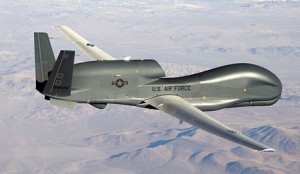 Unmanned aircraft have become an integral part of modern armies. Almost every day we receive information about drone attacks. Not only Al-Qaeda gunmen, but also civilians end up as their victims. The wide use of drones by the US military in the war against terror gave birth to the term Obama’s drone policy. However, the combat capabilities of unmanned aircraft are costly. NATO’s plan of creating a united group of reconnaissance drones (Alliance Ground Surveillance) could cost three billion Euros within 20 years.

Drones, or Unmanned Aerial Vehicles (UAVs), are becoming more widely used by the miltary, and their performance capabilities and functionality are growing. Initially, UAVs were exotic devices available only to the richest countries. Now they are becoming commonplace. The drones’ lower price in comparison with manned combat aircraft was considered one of their main advantages. Gradually the price of more complex machines has increased significantly. Today the purchase and 20-year operation of five American RQ-4 Global Hawk UAVs costs NATO almost $4 billion, while the price of the apparatus itself is less than a billion. Purchasing and maintaining approximately 12 Eurofighter Typhoon fighters, or 8 airliner-based long-range reconnaissance aircrafts, could cost the same.

The Alliance Ground Surveillance program is one of the issues on the agenda for the NATO summit in Chicago. “NATO’s operation to protect civilians in Libya drove home the importance of such a system,” explained Admiral James G. Stavridis, U.S. European Command and NATO Supreme Allied Commander Europe, on the eve of the summit. Global Hawk aircraft and ground-based command and control infrastructure will be the basis of the grouping.

The very high price of operating Global Hawks is considered one of its main shortcomings. A one-hour flight costs more than $30 thousand, while the same period for an F-22 – the most expensive fighter in the world – costs $19 thousand.

At the same time, in addition to super expensive RQ-4 aircraft, there is quite a selection of cheaper, smaller-sized drones, and the selection is steadily increasing. A growing number of firms and countries are now mastering unmanned aircraft production.

Drone performance capabilities are being actively discussed at forums and round tables, one of which was held at Mississippi State University (USA) on May 14. The organizers of the forum emphasized the importance of the drone industry for the United States and noted the revolutionary significance of UAVs for modern armies.

On the one hand, the appearance of drones has really caused revolutionary changes in military operations’ organization by sharply reducing the lag between the discovery of a target and its destruction. In the case of shock drones, devices capable of carrying weapons, the delay is reduced to seconds. Their speed is the main trump card of the West’s modern armies. They are capable of striking detected targets before the enemy, who are not accustomed to the sharply increased rate of information exchange, has time to react.

At the same time, active development of tactical-level vehicles is a potential Achilles heel for advanced armies. The danger lies in the fact that, for the moment, advanced armies actively using drones have not faced opponents possessing modern radio-electronic control equipment.

In case the enemy is able to break communication between a UAV and its command center, the consequences might be extremely serious. In fact, a brigade, division, or even a whole group using drones will lose a great deal of information from the battlefield.

For all the potential dangers of excessive use of drones, it is still necessary to possess them. Unfortunately, the Russian army still does not use UAVs to the degree of other developed countries. Russia’s military can still only dream about the capabilities of the United States or Israel, which actively use UAVs for artillery and air strike correction in real time, and frequently for pinpoint destruction with onboard armaments.

The resumption of defense industry funding has not led to immediate results. The first new generation of Russian aircraft did not pass tests. A way out was found in the purchase of UAVs abroad (in Israel) so as to examine these systems’ technologies and use principles, and in extending the developers’ circle. As a result of increased competition,aircrafts capable of withstanding the army tests were obtained, and are potentially fit for serial production.

“New generation” firms have also joined UAV development for the state defense order, such as “Tranzas” from Saint Petersburg, which is known for the development of navigation systems, simulators and avionics. New generation aircraft are still undergoing tests, but we can already say that the army will receive drones. However, it will have to wait for quite a long time in order to receive aircraft similar to Global Hawk.