Extending the endurance of electric unmanned aerial vehicles (UAV, UAS, RPAS, drones) is an important consideration for many manufacturers of such systems. While this can be achieved by adding batteries, the extra weight and space often makes this counterproductive. Recent developments in photovoltaic (PV) technology have made it a viable alternative for powering unmanned aircraft, and there are now many proven aircraft designs that incorporate solar power.

Rotary UAVs generally do not have enough usable space on the aircraft to place solar panels. They are less efficient at generating lift than fixed-wing aircraft, meaning that scaling up in size presents a significant engineering challenge. An experimental 100% solar powered quadcopter has been developed by a team at the University of Singapore – however, it is extremely thin and currently incapable of carrying a significant payload.

Small fixed-wing UAS may have enough surface area to integrate solar panels that will increase the endurance of the aircraft. For existing platforms, if a sufficiently thin and flexible solar technology is selected, this can even be done without redesigning the structure of the UAV.

The most commonly used parameter for comparing the performance of solar technologies is efficiency. Efficiency is a measure of how much of the incoming solar energy can be converted into usable electricity, and is affected by wavelength, reflectance, temperature, and a number of effects at the quantum level.

The records for solar efficiency currently stand at 29.1% for a single junction solar cell and 31.6% for a multi-junction solar cell. Multi-junction solar cells utilise multiple layers to capture light at multiple wavelengths, and are thus capable of achieving higher efficiencies than single-junction cells. The downside is that the manufacturing process is more challenging and expensive, making them more suitable for special high-budget UAV projects rather than mass-produced unmanned systems.

Power to weight ratio is calculated by dividing the power output of the PV system by its total weight. Integration of solar cells into the wings of an unmanned aircraft may require structural adjustments, as well as protective encasing that will allow the cells to survive the demanding environments that the solar UAV operates in. There may also be extra weight due to additional interconnects and cabling. All of these factors should be taken into account when calculating the total weight of the solar subsystem. 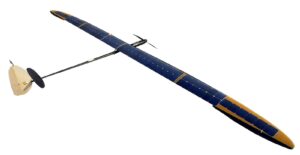 Power to area ratio is an important metric to consider, as the usable surface area for solar cells is limited even on large fixed-wing UAVs. Increasing the wing area of an unmanned aircraft design in order to accommodate more solar cells may result in an increase in structural weight and drag that is not compensated for by the gain in solar power.

Considering the above metrics in isolation may not be sufficient to gauge the suitability of a solar technology for a particular drone application. High efficiency may come at the expense of an unacceptable increase in weight, and a high power-to-weight ratio may not be enough to overcome a low conversion efficiency, especially if the available wing surface area of the UAV is too small to provide sufficient power.

A combined solar performance index for UAVs has been proposed by photovoltaic technology developer Alta Devices, which takes into account both power-to-area and power-to-mass ratios, since high values for both parameters are extremely desirable for UAV applications.

The proposed index multiplies the two ratios and takes the square root of the product in order to provide an output with the dimension of power (watts).

A wide variety of photovoltaic technologies with different chemistries have been developed by manufacturers and research groups. They can be broadly divided into two groups – wafer-based and thin film-based. Below is a selection of technologies that could be used to produce solar power systems that can be integrated into UAVs. 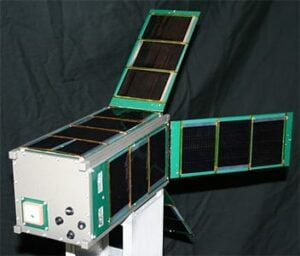 A large portion of the existing solar cell industry is centred around the manufacture of crystalline silicon wafers. This is a highly mature technology, and typically provides good efficiencies. However, the wafers are relatively thick, and are also brittle, requiring extra laminates to provide adequate protection. This can increase the total weight of the system by a significant amount and allow less flexible integration options, both factors that will particularly affect smaller UAVs.

CIGS is a flexible thin-film technology that provides up to 13% efficiency. The cells are sensitive to moisture and air, and need to be encased in hermetically-sealing housings which add weight and reduce integration options. CIGS cells also suffer from reduced yield in high temperatures and low light intensity.

Amorphous silicon cells provide a lot of advantages – they are inexpensive, easy to integrate into structures, insensitive to moisture and air, and the technology is mature. However, they suffer from low efficiencies, meaning that most drones will have insufficient area on which to mount enough cells to meet the system’s power needs. 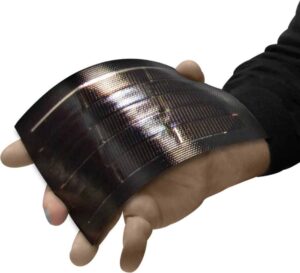 Thin-film GaAs is a newer technology that provides lightweight, flexible cells with high conversion efficiencies and high energy yields. GaAs thin-film cells are less sensitive to air and moisture and easier to integrate than CIGS cells, and the small cell size leads to high packing densities. These factors make them ideal for providing power to a wide range of UAV sizes and classes.

GaAs thin-film cells score higher than any other technology on the combined performance index detailed earlier.

HALE unmanned aircraft, also known as HAPS (High-Altitude Pseudo-Satellites), are intended to maintain continuous stratospheric operation for periods of many months. Applications of HALE UAVs include persistent surveillance, and providing communications in areas where network infrastructure is subpar or non-existent.

Currently, no HALE UAVs can perform year-round missions. However, due to growth in the solar and unmanned systems technology sectors, research and development of HALE platforms is increasing and performance continues to improve.

Batteries alone cannot sustain continuous operation of these UAVs, and so solar cells are a critical part of their power systems. 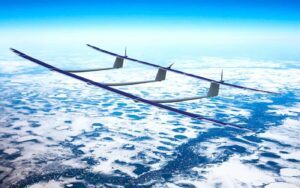 Due to the altitudes at which they operate, HALE UAVs face unique conditions. Higher altitudes mean lower temperatures, which actually increase the power output of solar cells. The factor by which performance is boosted depends on the temperature coefficient of the material, which in turn can vary over the wide temperature ranges found at these altitudes.

HALE UAVs typically operate at altitudes of 15 to 24km, providing them with unobstructed solar irradiation as well as a degree of protection from ultraviolet radiation due to the ozone layer. In addition to temperature, the solar performance of cells also depends on spectral irradiance, which in turn varies with time of day, time of year, and angle of incidence of the solar cell to the sun.

Because of their size, weight is an exponentially growing concern for HALE UAVs. Solar cells for these aircraft need to be lightweight as well as flexible in order to allow for easy integration into the wing structure. Due to the harsh environments in which HALE UAVs operate, the solar cells and their encapsulation system need to be highly resistant to extreme temperatures, vibration and flexing.