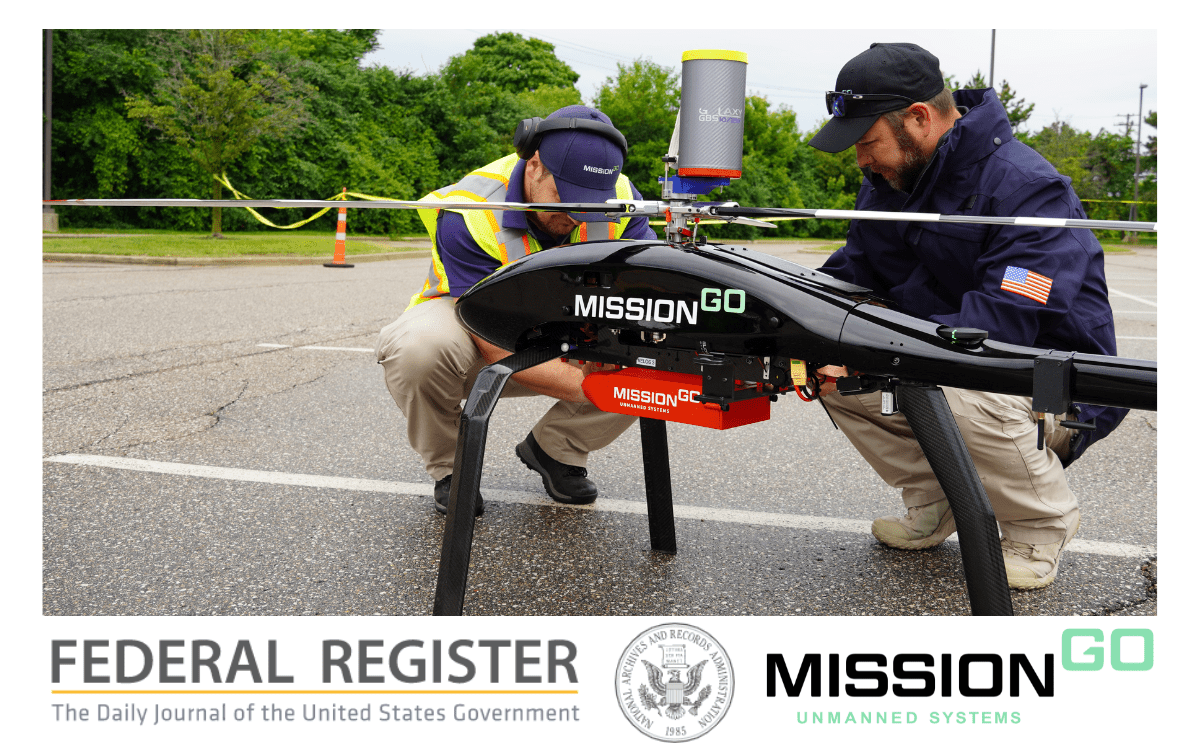 MissionGO Unmanned Systems has announced today the publication of the MGV100’s FAA Airworthiness Criteria in the Federal Register. This critical milestone is the next phase of MissionGO’s Type Certification of the MGV100, manufactured by MissionGO. This step marks the brand’s continued innovation in uncrewed aircraft capabilities, which will be followed by the final FAA-approved Airworthiness Criteria, FAA Type Certification Flight Testing, and MGV Production & Operations. An FAA Production Certificate will also be issued alongside the Type Certificate.

“The MissionGO Type and Production Certificates will enable our team to deliver advanced UAS capabilities and realize their impact on how we operate in a rapidly changing industry,” said Chris Corgnati, President of MissionGO. “Our goal is to fly critical cargo and perform infrastructure inspections safely over significant distances with speed and efficiency, saving time and lives. The Type Certification of the MGV100 will not only expedite MissionGO’s cargo operations, but also expand the team’s rapidly growing infrastructure inspection business to any long, linear structure, including power lines, railways, pipelines, and more.”

As one of the first uncrewed aircraft vehicles to be put through this rigorous certification process, MissionGO is proud to lead the way with the first single rotor, sub-55lb, all-electric aircraft to achieve this milestone. With the familiar design of a standard helicopter, the MGV100 boasts a fully redundant propulsion and control system and universal payload rail system with an average cargo capacity of 15lbs. The aircraft can travel up to 30 miles on a single charge with a flight time in excess of 1 hour.

MissionGO has tested this aircraft in a variety of settings including high winds in Window Rock, Arizona, multi-day flight operations outside Detroit, Michigan and extreme heat and distance in Las Vegas, Nevada. In these scenarios – and others – the MissionGO aircraft proved to be a safer, more reliable, and environmentally friendly alternative to standard delivery operations.

“The publication of the MGV100’s Airworthiness Criteria marks the next phase of UAS logistics – opening the opportunity for UAS operations over populated areas as well as flights beyond visual line of sight (BVLOS),” says Scott Plank, Co-Founder and Executive Chairman of MissionGO. “We are proud innovators among this incredible industry and look forward to advancing the future of unmanned operations.”

In addition to the Type and Product Certification of the MGV100, MissionGO is also pursuing a Part 135 Certificate to enable routine operations over people and beyond visual line of sight, carrying critical cargo such as human organs for transplant patients, and expanding the reach and efficiency of critical infrastructure inspections.