UAS Program to Monitor Burmese Pythons in the Everglades

An academic agreement between Warren County Community College and Embry-Riddle Aeronautical University has facilitated growth in a joint research project that will use unmanned systems to study Burmese pythons in southern Florida.

Warren and Florida-based Embry-Riddle are combining their efforts in researching new methods of detecting and removing pythons in select southern Florida waterways, including the Everglades. The research project, which was enhanced with assistance of the Florida Fish and Wildlife Conservation Commission and the South Florida Water Conservation District, is deemed essential as the pythons have been causing excessive damage to the area’s ecosystem for over 10 years.

Warren and Embry-Riddle plan on designing a specially made drone with numerous cameras providing infrared, near infrared, and polarizing capabilities that may be able to better detect the pythons and their habits from the air compared to ground-based commercially off-the-shelf options currently available. 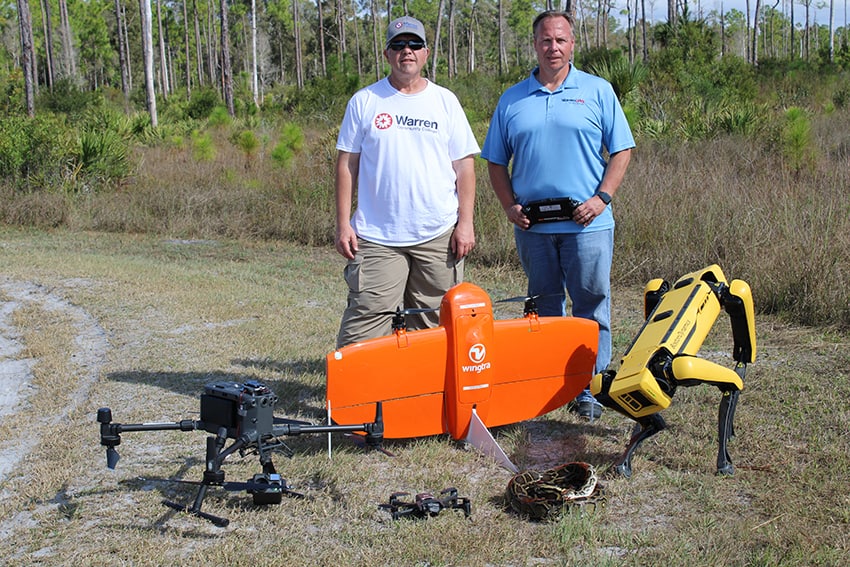 Pete Miller (left) Unmanned Systems Specialist and Dr. Will Austin (right) Chief Pilot from WarrenUAS stand with some of the equipment they provided to the project, including a DJI Matrice 300 RTK with RGB, thermal and MicaSense 10-band multispectral payloads, a WingtraOne carrying a MicaSense RedEdge 5-band multispectral, a Mavic 2 Enterprise, and a Boston Dynamics SPOT robot.

The Burmese pythons, a non-native invasive species of snake to southern Florida, have ravaged every native species from the raccoon, opossum, rabbit, and bird populations, to fauna and foliage. Pythons represent a species that reproduces effectively and grows rapidly in the Everglades environment reaching lengths up to 18ft long. Many earlier research estimates suggest that native species observed in the Everglades since the snakes were first discovered may well have declined by up to 90% in the past decade. The Commission is looking for new methods of locating the pythons, which are extremely difficult to locate, track, count in the murky waterways, to better understand their habits and impacts.

Warren, with its state-of-the-art Unmanned Aircraft Systems (UAS) program, and Embry-Riddle’s national reputation as the leading aeronautical university, makes for a perfect team to delve deep into the python world.

“The University-Community College cooperation is not new, what is new is taking our relationship from transferring credits, to conducting research, sharing knowledge and equipment, training procedures, and working on the expansion of robotic systems integration into work and research. We see the partnership with Warren as a first step in Riddle’s commitment to partnering with community colleges throughout the nation to expand the professionalism of the unmanned systems industry,” said Dr. David Thirtyacre Chair of the ERAU Department of Flight. 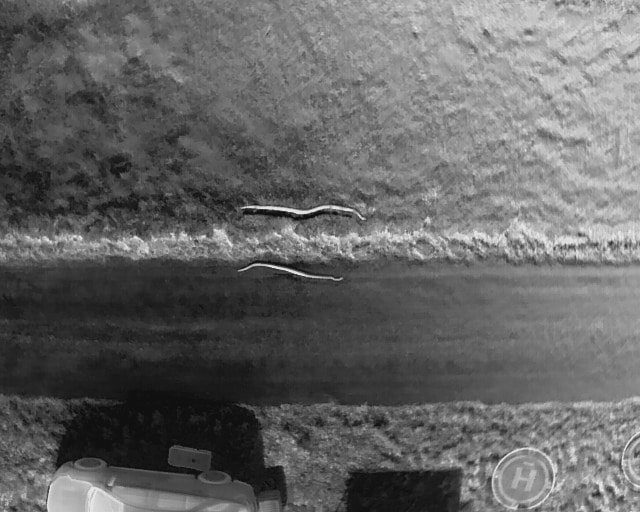 Test image of pythons captured with Near Infrared (NIR) camera

The first project the two teams collaborated on together was to travel throughout the Everglades with the assistance of local experts to see if unmanned robotic systems might be helpful in addressing the python issues.

“How many pythons are there? Where are they and what are their nesting patterns,” asks Dr. Will Austin, President of Warren and the college’s Chief Pilot, as well as graduate of Embry-Riddle. “All good questions and there are many others that need answers as we initiate this research effort.”

Through the relationship, the two schools will be able to realize similar goals.

Embry-Riddle’s relationship with Warren has been ongoing but informal for several years. With this project and an extensive educational agreement recently signed, that relationship will be solidified not just with the python project but with other educational pursuits as well.

“ERAU and Warren College have shared mutual benefits from the python project,” said Joseph Cerreta, Ph.D., Associate Professor, College of Aeronautics, UAS Flight Operations. “The most important of which expands both of our faculty knowledge bases, to bring real-world problem-solving experiences into the classroom. These opportunities give our faculty a chance to introduce the applications of UAS towards wildlife monitoring for student learning. In the future, students will be able to directly participate in wildlife monitoring with UAS via labs and student projects that have similar capabilities as the python project.” 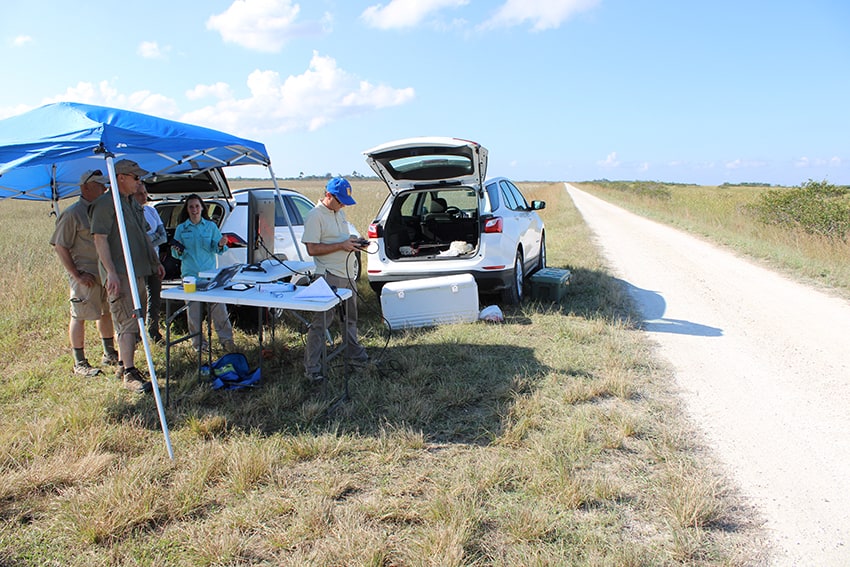 Joseph Cerreta and other members of the ERAU team sets up the ground control station along a levee in South Florida.

Initially the python project idea came from an ERAU graduate student. The student wanted to use a UAS to understand if pythons could be detected by its sensors as a part of his graduate research project. Since funding was limited for student travel, he could not continue this research topic. Embry-Riddle, though, saw the opportunity and discussed with Warren as a cooperative effort.

A proposal for an internally funded research seed grant was recently launched.

Over the span of the project, Warren is hoping to bring about 20 students a year to Florida as part of the python research team, and to integrate this research into the GIS, photogrammetry, and data analyses courses, so students learn not only the software, but to use it on real world problems to expand their knowledge and learning opportunities.

Dr. Austin notes that while the python project is exciting on the surface, it offers a great deal of potential in other areas as well. “If we can find pythons in the Everglades there is no telling how far we can go with UAS ability,” he said. “Military, law enforcement, the agriculture community….you name it. All will be able to benefit from these findings.” 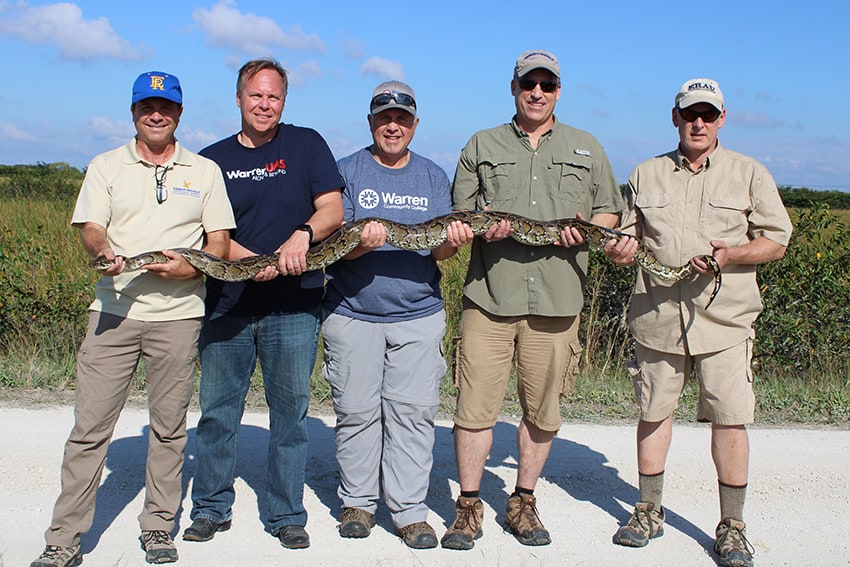 Beyond the python project, other benefits to the two schools working together run from transferring graduating Warren credits to ERAU toward a 4-year degree, grant dollars, and other broad-based heights still to come.

“Through the academic agreement between ERAU and Warren, our relationship will continue to expand,” said Cerreta. “Not only will students be able to matriculate from Warren’s UAS program to our ERAU Worldwide Bachelor of Science in Unmanned Systems program, we will also continue to grow our research capabilities together. Right now, Warren is leading our joint effort to find federal research opportunities such as through the National Science Foundation to grow our python research. This will also expand to many other UAS-related applications to contribute to our field of study together.”

“I believe we are true partners,” said Dr. Austin. “We each bring something to the table. We complement each other in many ways.”

Embry-Riddle Aeronautical University is the world’s largest, oldest and most comprehensive institution specializing in aviation, aerospace, engineering and related degree programs. A fully accredited university, Embry-Riddle is also a major research center, seeking solutions to real-world problems in partnership with the aerospace industry, other universities and government agencies.

Warren’s drone program continues to be a leader throughout the educational community having earned numerous certifications from many industry organizations, including AUVSI, ASTM, & the FAA.