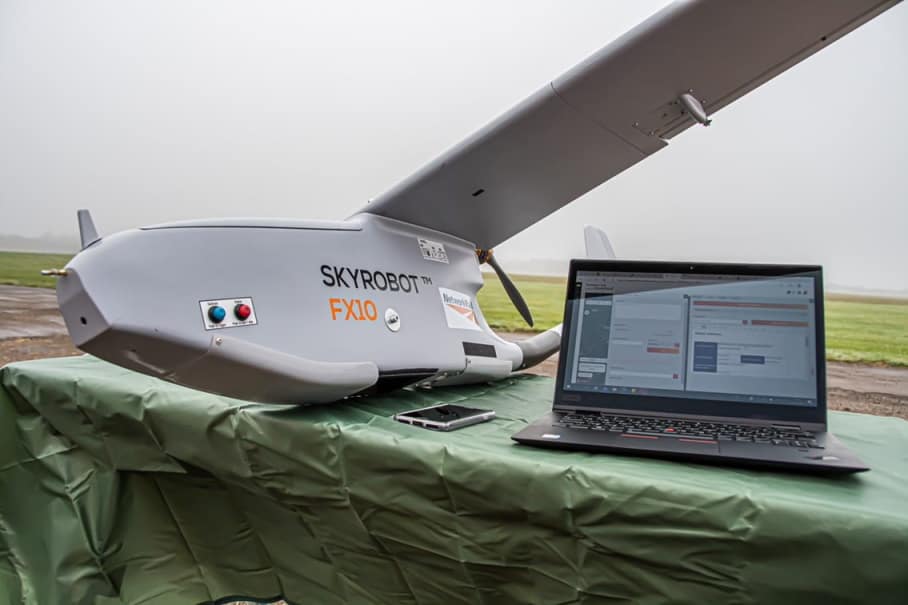 Network Rail has completed a 25-kilometre Beyond Visual Line of Sight (BVLOS) drone flight over dry land, believed to be the furthest such civilian drone flight in Britain. The milestone was undertaken with the Robot Aviation SkyRobot FX10, a portable and modular fixed-wing UAS (unmanned aerial system) designed for professional surveillance missions.

The proof-of-concept flight from Bicester along the East-West Railway was the culmination of 18 months of work, and represented a significant step forward in terms of how drones can be used to inspect the railway safely, quickly and cost-effectively.

Drones and helicopters have long been used by Network Rail to identify faults on the railway, helping to predict and prevent failures to reduce disruption for passengers, while also representing a safer form of maintenance by limiting the number of manual inspections that need to be carried out by foot.

Until now, drones were only ever flown above the railway when they were in clear sight of the operator, and usually only for four or five kilometres at a time. While this can still be a helpful tool to inspect Britain’s rail infrastructure, it requires the team involved to set up multiple times at different locations. The ability to fly BVLOS enables the air operations team to inspect the railway over a much larger area while saving valuable time and costs.

A Network Rail helicopter also flew alongside the drone to test whether or not the two could work together, and whether their respective systems recognised each other. It was proved that they did work effectively together, and data captured by the helicopter will be used to create a ‘digital twin’ of the railway section that was flown over.

Rikke Carmichael, Network Rail’s head of air operations, commented: “While flying Beyond Visual Line of Sight will ultimately provide us with much greater capability, it is worth emphasising that this was a proof-of-concept flight, and that a shift to using BVLOS as business as usual will take some time.”

“Nonetheless, yesterday was an important milestone and I’d like to thank my team for all their hard work on this project over the last couple of years. We’ll now turn our attention to agreeing a strategy for using drones both VLOS and BVLOS, after which we will want to engage with industry for the next exciting phase of BVLOS becoming another routine service the Air Ops team provides the business.”